GEMS OF THE AEGEAN SEPTEMBER 2009 Part 9

Thursday 17th September 2009
This was to be another two-port day, with early arrival first at Heraklion, the main port on the island of Crete. With only a few hours here, after breakfast I took the shuttle bus to the port entrance but instead of going into the city, I enjoyed a walk around another part of the port, within the restricted area. 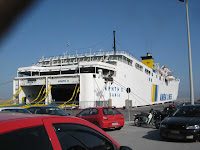 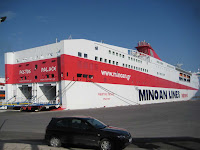 FESTOS PALACE, KRITI II, FLYINGCAT 4, EASYCRUISE LIFE and OCEAN VILLAGE were all at nearby quays, but with none of the hustle and bustle of a harbour such as Rhodes. 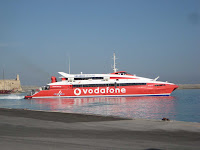 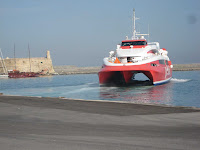 The sea was calm, the sky blue and ship reflections lovely, but I had to return to the ship for departure at 11.30 a.m. followed by a special invitation.

Our Ocean Liner Society group had been invited to visit the Bridge at 12 noon and we were very happy to accept that invitation.

I liked seeing the old and new equipment, the flags (including signs for Bahamas and Airtours), the Bridge wings and the views aft from there, the view down to the forecastle and the ship’s bell,

the Captain’s hat and coffee mug, and of course the Master of the ship himself.

He made us most welcome with his speech: he was obviously a senior and professional Greek Captain with Louis Cruise Line, but
seemingly with a fiery personality.

We were due to arrive in Santorini at 4.30 p.m. and it seems that thanks to our new friend Captain Goumas and the Guest Host Ion, we were given preferential treatment in getting one of the first tenders ashore.

Santorini is a crescent-shaped island, originally formed in 1600 BC, with subsequent volcanic eruptions

in 1925/26 (photographed at the time), 1939/41 and 1950 on the nearby island of Nea Kameni. It is the largest caldera on earth, and the picturesque cliff-top town of Thira is a huge attraction to visitors; one can look out from here to the nearby Nea Kameni.

We had anchored safely in the caldera of this volcanic area, so the priority ashore was to get up to the village of Thira by walking, riding a donkey or cable car.

We chose cable car (I have walked up once before) and had time to walk along the cliff top and enjoy the fabulous views down into the caldera.

We could see several other vessels down there, and by turning round we could also look over the island towards the distant sea and mountains.

Land clearance and levelling could also be seen on the outskirts of the village, presumably to create more building space. 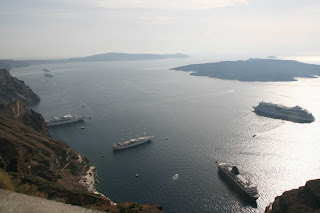 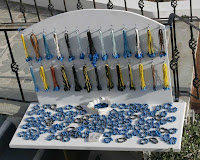 Tea and tasty Greek tzatziki with fresh bread completed our afternoon wanderings on top of the Santorini cliff-top paths, before heading down to the water and the tender back to AEGEAN PEARL in the gathering dusk. My diary jottings for the rest of that day just say drinks and dinner, so I shall leave it at that, as we set off to sail 131 nautical miles back to Piraeus.

Friday 18th September 2009
Anchors were dropped and we tied up in Piraeus at 5.30 a.m. in the wet but warm darkness; breakfast was being served early so passengers could disembark quickly, and so a last meal was enjoyed together on board The AEGEAN PEARL. Two of us set off around the harbour to enjoy seeing what ships were in port or ferries loading, before taking the bus to the Athens Airport. By this time the puddles had dried, the sun came out and the port was busy. We heard Police sirens and ahead of us on the quayside was great activity as a man was pulled from the water and resuscitated – he must have fallen in very suddenly and been rescued by someone using a nearby emergency ladder to reach him down in the water. It certainly all happened very quickly.

Bus tickets were bought (Euros 3.50 each) for the one and a half hour journey to the airport, and on the way I enjoyed seeing all the countryside, mountains, Glyfada with its wealthy area and marina of huge and expensive yachts, and the more ordinary swimming beach of Attica. After snacking on the last little spinach pie of the trip, I flew home to England; and if I might make a play on words, it had been a gem of a trip on two jewels of the Aegean – AQUAMARINE and The AEGEAN PEARL. 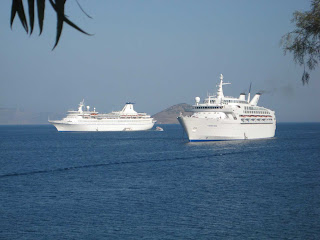 GEMS OF THE AEGEAN SEPTEMBER 2009 Part 8

GEMS OF THE AEGEAN SEPTEMBER 2009
Part 8

Wednesday 16th September 2009
We arrived at the island of Rhodes at 7. a.m. under wide blue skies, in ever-increasing heat. Most of us remember that its great landmark was one of the Seven Wonders of the World: the Colossus of Rhodes, which collapsed after an earthquake about 225 B.C. After breakfast, we were treated to the sight of our esteemed Ocean Liner Society Chairman standing on the quayside outside our several port side cabins – he was kindly taking photographs of several of us at our individual portholes, using our individual cameras, so he was rather festooned with them.

Then it was off to the Old City, enjoying the sight of the other cruise ships and local vessels as we walked around the harbour path.

We could also see our little gem (AEGEAN PEARL) berthed between a BLUE STAR vessel and GEMINI.

The route wended its way under the shade of trees and amongst brilliantly coloured flowers, and led us to the Tourist Information Bureau. Outside this and unexpectedly set into the path were seven attractive stone mosaic pictures, all of particular sports.

They were of weightlifting, running, handball, rowing, swimming, wrestling and basketball.

The coffee stop was in the harbour on board a floating restaurant ‘Kontiki’, with far-reaching views from the top deck.

A small Ice Lounge vessel turned nearby, allowing us to see that it was a glass-bottomed boat offering half hour cruises. She turned in front of Symi II.

A Salamis Lines vessel could be seen far away between Rhodes and the distant Turkish mountains, and a grey hulled naval vessel suddenly rushed past the harbour with a flurry of foam and testosterone.

A streamlined private yacht sailed out of the harbour accompanied by yearning noises from several watchers; we noticed ‘Aquaholic’ moored nearby, and a Love Boat - no, not the famous one, but No. 36. We approached AIDA DIVA and I was persuaded to purse my lips so that the obligatory photo could be taken of me appearing to kiss the red lips on her bow.

Back on board AGEAN PEARL, we all enjoyed lunch and then settled on our favourite aft deck to watch the harbour events. BLUE STAR 1 came in and soon left with her new passengers;

a small freighter GEPA at a nearby quay appeared to be loading bags of fertiliser; AQUAMARINE had us reeling back from her black smoke as she started engines and prepared to leave; Anek Line’s IERAPETRA L came in and soon left; meanwhile our tug appeared to be losing the battle to get us off the quay because of the strength of the prevailing wind, so other cruise ships left instead, whilst we had to wait.

With more space for manoeuvres we were finally underway and able to leave Rhodes harbour, and watch SYMI 2 sail past. 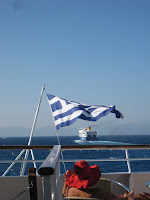 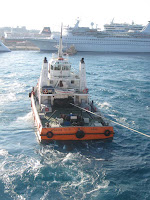 The light was still beautiful so we enjoyed the sea views until it was time to prepare our Elegant Attire for the Captain’s Cocktail Party in the Clipper Lounge before dinner.

We paid our respects to Captain Stathis Goumas with the usual handshakes and thanks and enjoyed another happy meal in the Restaurant before an evening on the aft deck. This time we were sailing 171 nautical miles to our next port: Heraklion, in Crete.

GEMS OF THE AEGEAN SEPTEMBER 2009 Part 7

Tuesday 15th September 2009
I enjoyed 8 hours of sleep, disturbed momentarily by the anchor going down well before dawn, and then breakfast, whilst we all enjoyed knowing we were back in Kusadasi, Turkey. 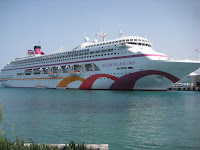 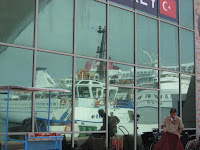 How lovely, another chance to go ashore under clear blue skies in the comfortable heat of this bustling port. Nearby was the huge bulk of SPLENDOUR OF THE SEAS, and OCEAN VILLAGE 2, and walking past EASYCRUISE LIFE we could clearly see the wording on the dark hull: “Reunite the Parthenon Marbles”. Hmmm, that’s telling us! 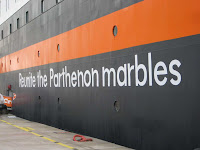 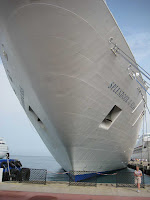 On that ship it was also possible to see one of her previous names – JASMINE –still visible on the hull. We remembered she was built in Poland in 1981 as LEV TOLSTOY for Black Sea Shipping, with six sister ships. In fact we could also just see that original name on another part of the hull when we looked from a different angle.

Walking round the harbour gave us the chance to see local fishing boats, some with lines of washing on board drying in the breeze, as well as the cruise ships. 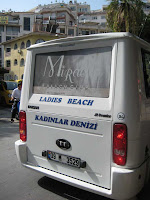 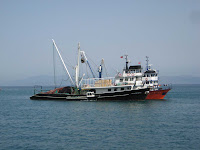 I noticed a small white van with “Ladies Beach” written on the sides, and discovered that years ago there had indeed been a Ladies Beach nearby; now it was open to all, and the white vans ran as a taxi service around the area. What an eye-catching title.

This was to be a short visit to Kusadasi so we were all back on board by 11.30 a.m. ready to sail the 47 nautical miles to Patmos, Greece. As usual I think we all felt very proud and proprietary about our little AEGEAN PEARL as she sat amongst the huge cruise ships, before sailing gracefully away from the Turkish port.

After lunch on board, we arrived back at the little port town of Skala on the island of Patmos at 4 p.m. in the most wonderful clear light. Many passengers went on excursions to visit the Monastery of St. John the Theologian, high above us in the village of Chora, with its 900 years old fortifications. With AQUAMARINE also anchored out in the bay, this was the ideal opportunity for photos of the two ships, looking fabulous in the blue sea. 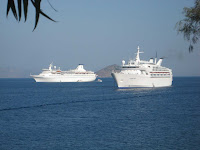 After a walk along the coastal path under shady trees, an ice-cream in the little port was enjoyed. I noticed the usual dogs asleep in various wayside shops or shady areas. 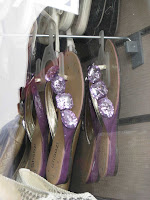 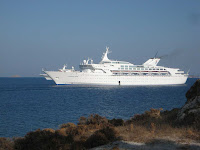 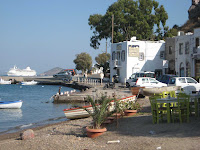 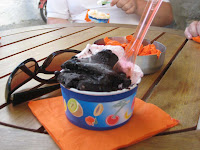 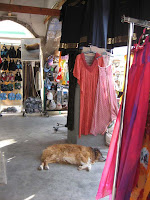 Back on board AEGEAN PEARL, the light, air, clear water, scenery and environment were just wonderful and reminded us all of why we like to be at sea in congenial company: it’s that sense of exhilaration at being alive on such days. Tea and scones gave us a moment of humour. Jam was provided in very small packets, and my portion fell out of the packet as one rather congealed piece, onto my plate. Having recently seen several Viking Line ships, it was immediately recognised as being the shape and red colour of a Viking Line funnel. 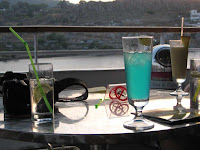 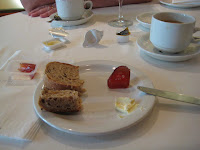 We left Patmos just before 9 p.m. and enjoyed Greek Night dinner on board, as well as the evening’s entertainment, sailing the 105 nautical miles to our next port of call in Rhodes.