Thursday 28th September 2017
We arrived in Madeira on schedule at 8 a.m. and berthed alongside the quay. Now I shall have a nostalgic few minutes remembering some of my past life.
Everything looked so different to my first visit here in Madeira on a Union-Castle liner. At the time I was working in the Purser's Bureau on the CAPETOWN CASTLE, which in 1966 was filling in on the Cape run as the two new ships were not ready to enter service. She was slower than the regular ships so we left Southampton and headed for Cape Town via Madeira, Ascension and St. Helena, knowing we would head back again to the UK from Cape Town without going up-coast. The seas were rough as we headed for Madeira and the other Purserette and I were sea-sick and suffering, especially as there were problems with the water supplies on board as well as the ventilation. We enjoyed the short port call in Funchal, and then we set off again. 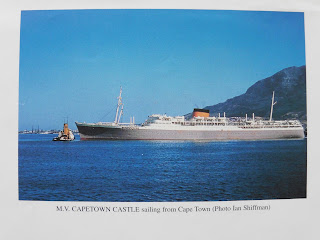 The water and ventilation problems were sorted out after a day or so and soon we were all better and enjoying the passenger work in the Bureau. The ship was built in 1938 at 27,000 gross tons so we felt every shudder and creak of the wood in the ship. I remember being advised only to worry if the noise of the creaking stopped. That kept things in proportion.
The port calls at Ascension and St. Helena ( I had a little time ashore) were fascinating and I am still so pleased that I wrote home regularly to my parents (remember those blue aerogrammes available in the UK?) and all those details could be published in my book (Union-Castle Line Purserette) many years later.
Our voyage home from Cape Town was uneventful and we arrived back in Southampton on 14th February 1966. The passengers disembarked, the ship was prepared for our next voyage and we sailed away again the very next day. This time our route was to be a call at Flushing (now known as Vlissengen) in the Netherlands to pick up a big group of Dutch-speaking passengers, before sailing to Madeira again, then Walvis Bay in South West Africa (now known as Namibia), before arriving in Cape Town.
It was after we left Flushing that the seas became truly rough and the ship had a tremendous roll, with the occasional enormous wave hitting us. I woke very early from a fitful sleep on the morning of 20th February, dressed and staggered round to the other Purserette's cabin and we all sat on one bed feeling rather scared. Then the 4th Officer arrived and told us they would attempt to hove to for an hour or so and head into the wind. That manoeuvre should help although we might not be able to get into Madeira and land the passengers there.
The sight of what greeted us in the Bureau that morning was astonishing, as so much seemed to be on the floor. The only things on the Bureau counters were the heavy typewriters which we used, which had very long carriages. The ship finally hove to about 5 p.m. and could think about heading towards Madeira. We reached the shelter of the island about 7.30 p.m. but it was still too rough (Force 6) to land anyone so we simply sailed up and down one side of the island all night, rolling and pitching all the time.
The next morning things seem to have calmed down a lot, and we finally got alongside at 8.00 a.m. and could land the passengers. We managed to sheer off two bollards on the quayside, which were fairly solid metal ones, but this excitement seemed quite ordinary compared with the sea on the previous days. The day before we got to Madeira we discovered that the sea and wind was squalling at Force 12 several times during the day. I think many of us had been truly terrified as we took our sea-sickness tablets, but skilled seamanship got us safely into port. I see that in my note home to my parents I said "All in all we feel lucky to be in such a large ship - a smaller one wouldn't have survived."
Today that sentence makes me smile, but at the time several of us were very frightened and were so grateful to get through what we did. I shall end my memories there, as I plan to go ashore here in Madeira and enjoy the here and now.
To be continued...
Posted by U-Cdolly at 7:49 pm

Wednesday 27th September 2017 Today there is no port and no alarm call, so it was a late breakfast for me on our sea day. 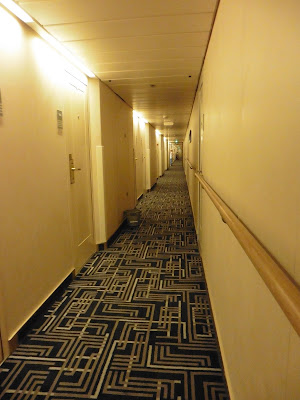 Setting off for breakfast 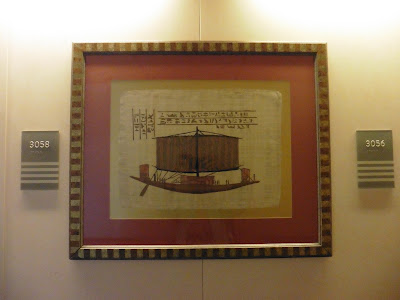 Artwork on the way to breakfast. The sun was shining again, the sea looked blue and lovely, and there was time to enjoy the ship and the views outside. Way over on the horizon I could see a Costa cruise ship silhouette but we are out at sea sailing north to Funchal in Madeira, a distance of 614 nautical miles from our port yesterday in Gibraltar. At noon we heard that we are North 34 deg, 39 mins, and West 10 deg, 43 mins, doing 16.5 knots and there is 4,000 metres of deep water beneath us. I know that off the coast of Portugal there is a huge deep trench so we may be somewhere near that. Walking in the Glass House I noticed the attractive lavender-coloured plants dividing part of the area; in that area I also noticed the wall behind the coffee/tea station. It seemed to be glass or enamel but the colours and design were a delight to see. A fish and chips lunch at the Snack Shack was another treat during the sea day. 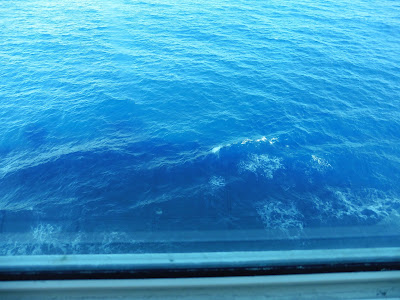 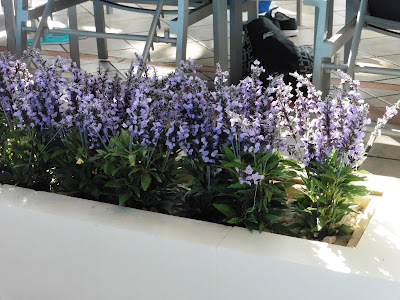 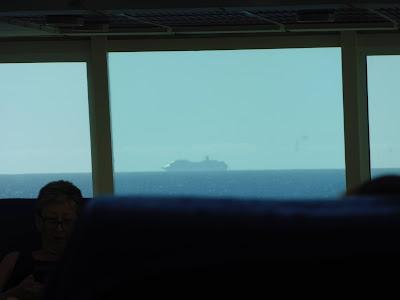 A Costa cruise ship on the horizon 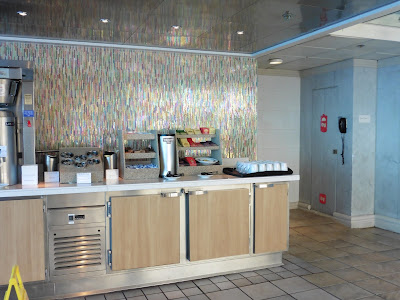 The tea and coffee station 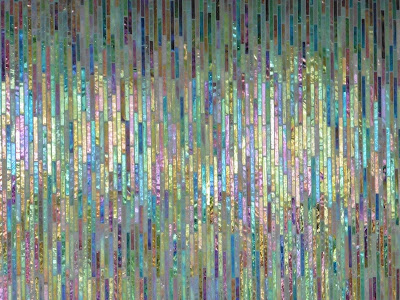 The back of the coffee station 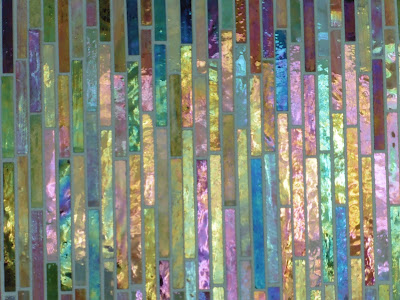 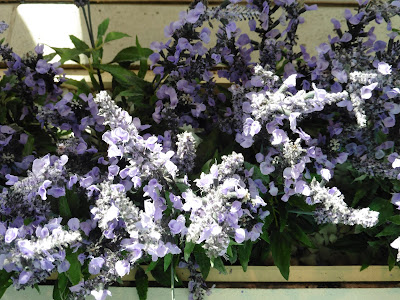 More lavender colour in my life. I remembered to take a couple of pictures of my twin-for-single-use inside cabin. 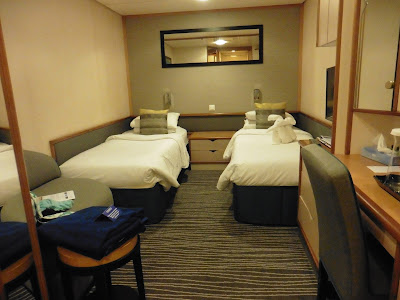 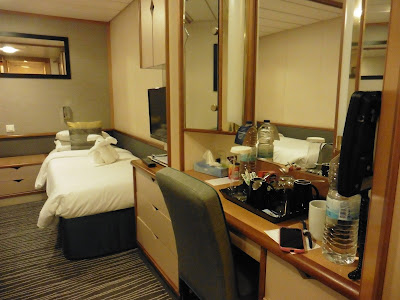 Another view in my cabin. After an afternoon doing nothing much, except enjoying the sea day and the warmth of the sun in late September, it was eventually time to go inboard and prepare for dinner and the evening's entertainment. We decided to eat in the 47⁰ Gallery and once again chose the "whilst you wait" offering once we had been seated by the waiters. 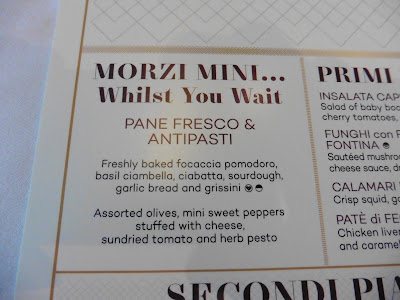 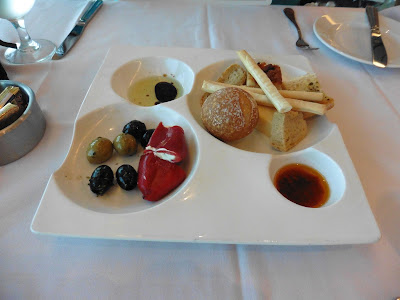 This is how it looked I am still amused by this presentation but it is so apt (and delicious). Starters were chosen and then the main courses. 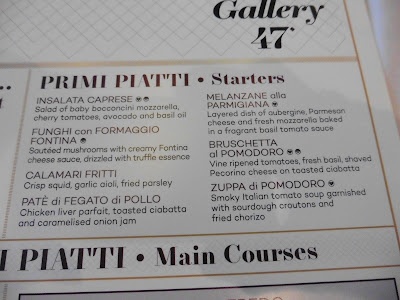 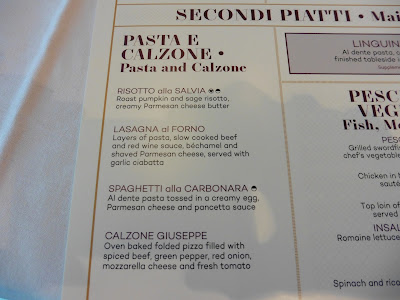 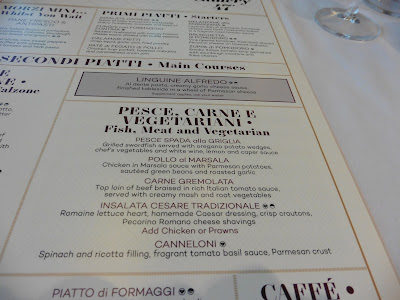 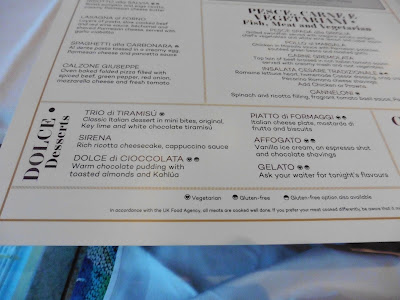 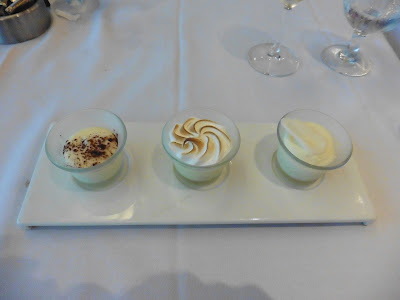 And my choice was... As before, the desserts were another delight and I finally made up my mind to try the Trio di Tiramisu. It was another treat on this ship. Talking with some other guests, my diary tells me that the couple we were talking with were soon going to be looking after a friend's small-holding and we were shown several photographs of Archie the sheep who lived there. He looked a handsome lad! Emerging from the Dining Room it was a little disconcerting for guests to come face to face with what might be seen as new silent members of staff, with most unusual uniforms. The Atrium itself is eye-catching and a good place for an after dinner stroll or just to see and be seen. 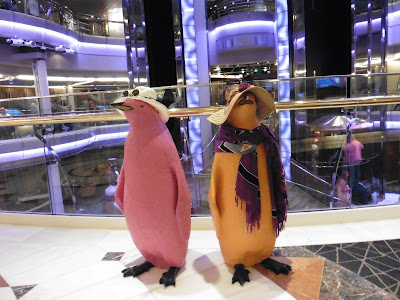 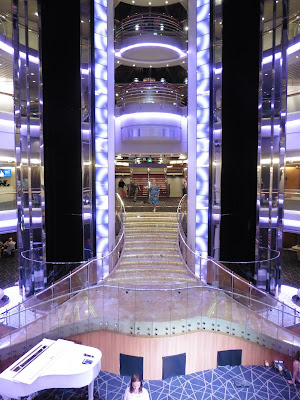 Part of the Atrium 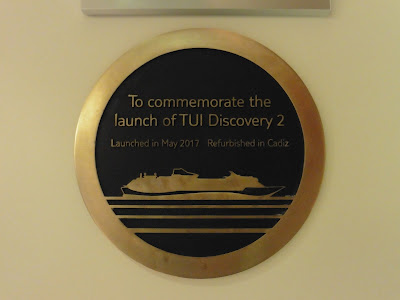 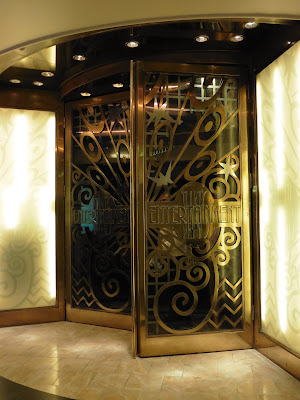 Lovely doors. The music show that evening was with live music and gave me the chance to photograph the elegant doors to the theatre on the way in. That was our day at sea heading for Madeira tomorrow; I first went there many years ago when I worked as a Purserette with Union-Castle Line at sea, so it might be a rather nostalgic day. Ships seen: Costa something at sea on the horizon. To be continued...
Posted by U-Cdolly at 1:42 pm