Saturday 14th September 2019
I slept like the proverbial log last night and woke to the news that the ships were not running, as winds were blowing at force 12 or 13 - the limit is 8. My travelling companion for this trip was due in Rafina about lunchtime so I had already let him know about the cancellations. Our plans to meet in Andros later today had to be abandoned of course and I went to the travel agents to see what could be done. The answer was still nothing of course. There was time for coffee and cheese pie. 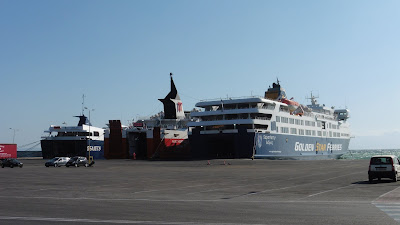 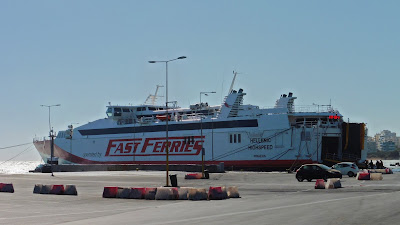 All safely tied up in port


I went back to my rooms and collected my bag, ready to meet my friend at the port when his Rafina bus arrived from the airport. My kind landlady aided me booking accommodation for this evening out of the area, as there was little in Rafina itself. By the time we had arranged this I could walk down to the port, meet my friend and hear what sailings he had managed to arrange for us tomorrow. It was expected that sailings would take place then.

We had some lunch and then arranged for a taxi to take us along the coast to the small seaside resort and the house called 'Nemhouses near the airport and the sea in Artemida'. The owner met us on arrival, as the house seemed to be in a very rural village area, but it offered several bedrooms as well as living room and kitchen facilities. We were told which lane to walk along to get to the sea and we soon did this and walked along the beach towards the small town a couple of miles away. The sun shone, the wind seemed lighter here, families were sheltering under trees, children were building sandcastles, some people were swimming, the distant church had visitors surrounding it, and all was well with my world.

There seemed to be a small town with a road running beside the beach, with several cafes or restaurants lining one side. Several coaches were parked on the other side of the road and I think these must have come in from other local areas with many ladies on board, who were now enjoying the music, food and drink on offer.

We did the same, and walked back in the dusk/darkness to our latest unexpected accommodation.

Friday 13th September 2019
It was still dark as I flew out of London Gatwick airport at 05.35 on a damp English morning with my small rucksack in the rack above my seat. I was on a new Airbus A320 aircraft heading out to Athens. Tea and porridge were soon served (thanks easyJet), before sleep overtook most of us on the flight. Three and a half hours later we arrived in hot bright sunshine in Athens airport, and I headed off to the bus stop to take me to the port of Rafina.

Waiting at the stop I got talking with a group of British teachers also going to Rafina. They were planning to get the ferry out from there to Marmari, just an hour's sail across the water, to attend the wedding of friends. By this time I'd had texts from Greek ferry booking agents to tell me that high winds in Greece were going to prevent my booked sailings in the near future. I told the teachers about this so at least they were warned.

Once in Rafina I could feel the effects of the ever-strengthening wind and hurried to my accommodation. By this time all ferries had been cancelled leaving Rafina, including my first sailing early tomorrow morning.

I walked back into the port area and checked with the local ferry agent about sailings and she said everything had been cancelled due to very high winds. I was advised to come back tomorrow. I decided to watch the ship arrivals from a safe place.

Ships seen: Fast Ferries Andros rolled in and berthed, Panorama actually sailed over to Marmari, Sea Jets Paros Jet, Fast Ferries Hellenic Highspeed arrived off the port and had the utmost difficulty in coming astern to tie up.

I watched the Hellenic Highspeed try to turn and come astern. I stood probably 200 yards back from the quayside, in a safe and sheltered place, as I think the wind would have blown me over otherwise. The wind was blowing her all over the place, as she edged astern; ropes were thrown and fixed; more ropes were thrown and kept loose; she was trying to get astern and also to get her port side close to the quay. It took her 35 minutes to do this, with 16 ropes on her port side, and finally her ramps were lowered and the cars and vehicles were hurried off the ship. Foot passengers came down the allocated ramps and staggered across the quays, whether from seasickness or the strong winds or both, I don't know. The engines were stopped, the ramps came up partway and she was finally home for the duration. 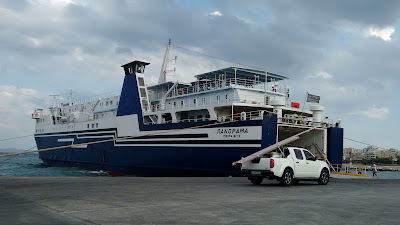 Panorama ready to sail over to Marmari 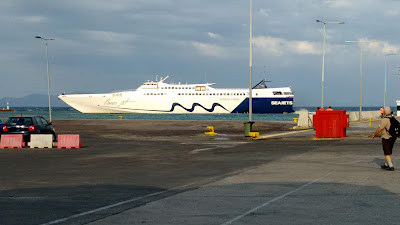 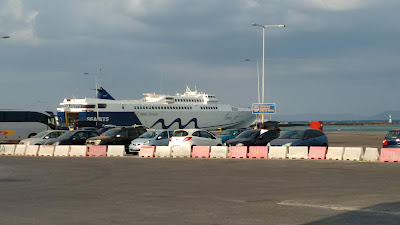 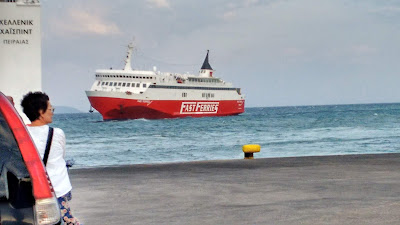 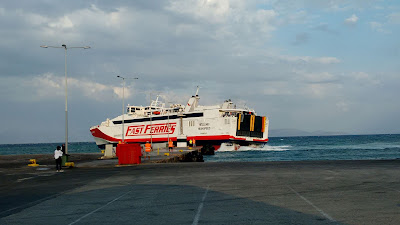 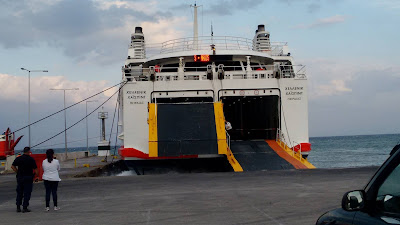