Later that day came the news that Louis Cruise Lines are to change their name to Celestyia and acquire another ship at about 25,000 tons with some balconies, for use in 2016. We worried immediately about the future for our little LOUIS AURA but apparently she is not included in the name change, but where that leaves her future is unclear at the moment.

At 5.45 p.m. we presented ourselves on the Bridge ready for arrival in Symi, a Greek island with a harbour nestling amongst the usual mountains, and entered through a fairly narrow entrance between them. 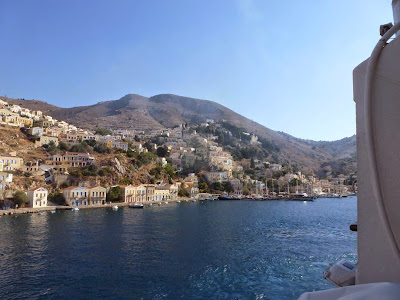 Going astern into the bay 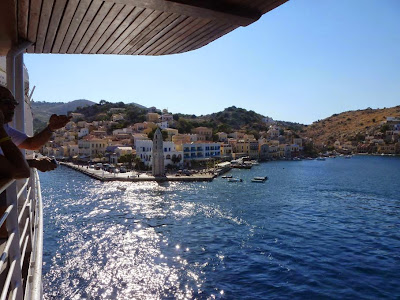 The other side of the bay 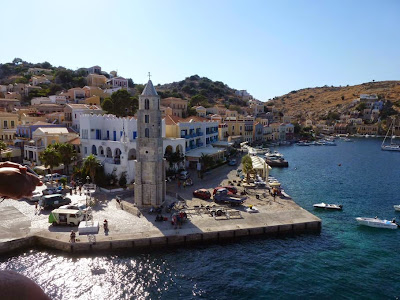 It was a spectacular sight to see this tiny port ahead of us as we arrived, turned and went astern to dock safely in the little town. Even LOUIS AURA looked huge in this port; Captain Gritzelis broadcast a welcome to us passengers and reminded us that the island only had a couple of months each summer to welcome visitors so any spending on our part would be most welcome. That made us all smile and make sure we helped in any way we could.

The ship’s ropes were tossed out to a local rope-man in his little boat, who skilfully took them individually to the various capstans on the quayside, as we looked down on the beautiful blue water. 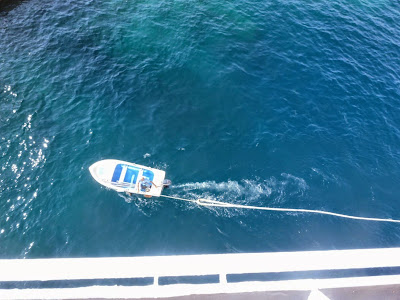 On the quayside we could see people strolling, or doing deliveries, but I was surprised to see a scooter driving along the road because it looked as if it was being driven by a black and white dog. When I looked carefully of course the dog’s man was sitting behind it and I think there was a white-bloused woman with long black hair riding side-saddle behind him, but it was quite disconcerting for a moment. 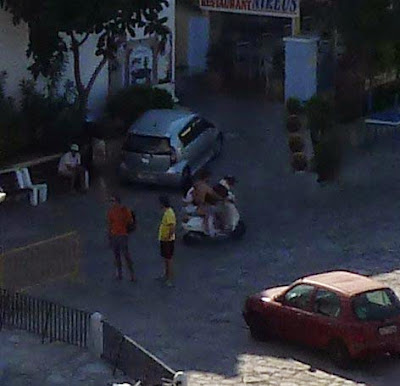 The dog on the scooter 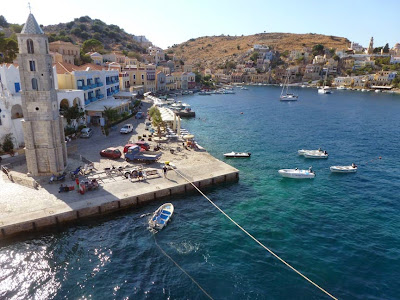 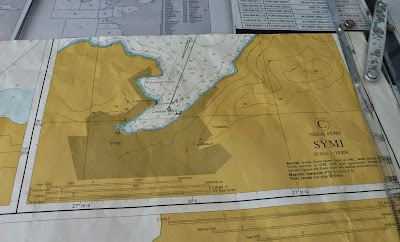 Symi on the chart 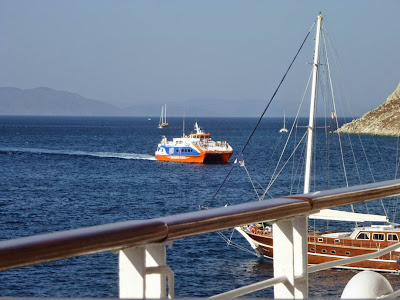 It was after 6 p.m. but the temperature was still up in the high 20’s C, as everyone disembarked from the ship. Some went on tours but most of us walked around the town to enjoy the views and try and help the local economy. 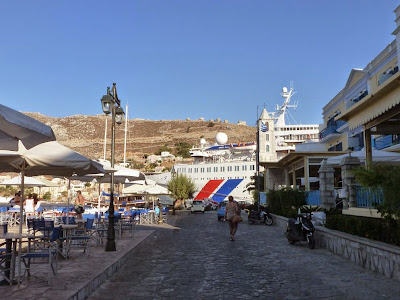 Both sides of the port 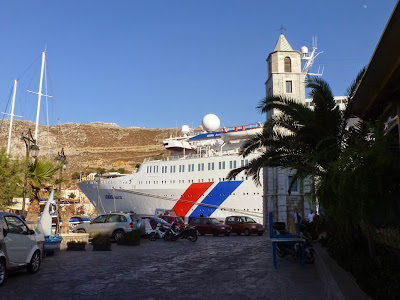 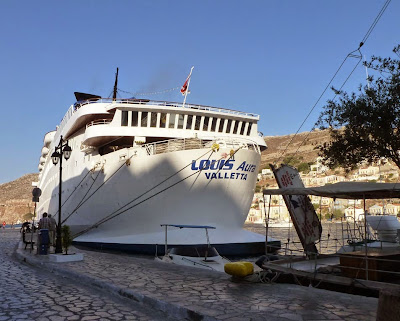 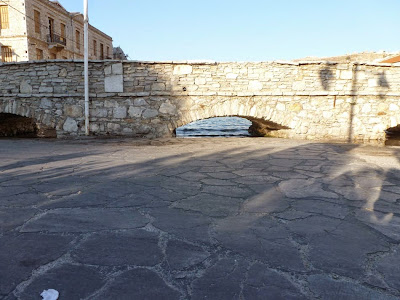 At the end of the bay, astern of the ship, were two pedestrian stone bridges, one higher than the other. The first one had arches underneath to allow the sea to spill further inland if necessary, and after walking over this to a lower level I found myself inadvertently paddling as I stopped to take photos. Sea water was gently starting to lap at the soles of my shoes – what fun. 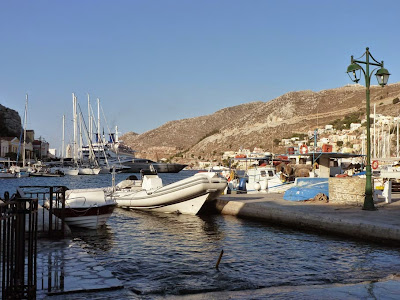 A bit of paddling 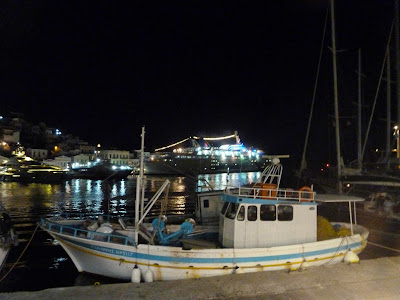 Louis Aura across the water 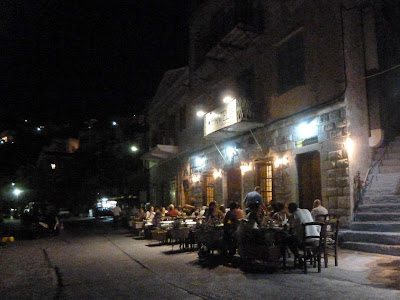 We found the wonderful Restaurant Pantelis serving freshly prepared and cooked Greek food so spent an enjoyable time there watching the sun go down and another Dodekanisos Seaways ferry come in and settle down for the night. A stroll home along the still-busy streets completed the day ashore, knowing that the ship would not leave until 3.00 a.m. the next morning. What a delightful place this is, and somewhere else to go on the list of islands to re-visit for a longer time.


Tuesday 5th August 2014
We were prepared to arrive in Kos at 7.00 a.m. but apparently we were delayed by the departure of the Blue Star Ferry 2 plus more wind than expected, so it was 8.00 a.m. before we were alongside. The heat was tremendous even that early in the day. Louis Cruises had printed English copies of the Daily News programme again, which we appreciated.

Yesterday we met the Staff Captain on deck and he recognised me from sailing on LOUIS AURA last year, which was nice, and he joined us all for a chat and invited us to visit the Bridge today.

This morning therefore I went to Reception to register my credit card and asked them to arrange for us to visit the Bridge, as invited by the Staff Captain. A telephone call was made to the Bridge and we were invited to come back to Reception at 1.40 and be taken up top for departure from Kos. Hooray, how kind.

We watched arrivals and departures from the port, but they were mostly very local small ferries going to and from the Turkish coast which could be seen faintly in the distance.

Suddenly however a very unexpected sight appeared and was recognised by my very knowledgeable companions – it was HALAS 71; we thought she might sail right beside us and enter the harbour but she didn’t so we had to be content with various views of her. She started life in 1914 (yes, really) as a ferry, but World War 1 decided otherwise, and she was handed over to the newly-created Republic of Turkey in 1923 and became a passenger ferry on the Bosphorus. In 1984 she was bought by a shipping company, and refurbished. In 2009 she was sold on to current owners, renovated yet again, and is now available to charter for 12 guests as a luxury cruiser, or for events. She is flagged in Istanbul; (I found this website with some details http://www.myhalas.com/history/) She certainly looked different to the other shipping we have seen, and it is astonishing that she has lasted so well.

Restaurant lunch was again disappointing but we decided to have dinner ashore this evening in Symi. At lunch my companions chose the fruit pudding, but decided that it tasted of shower gel (how did they know that?) but apparently it is a favourite pudding on the ship. I didn’t try it.

We were taken up to the Bridge for departure from Kos and were introduced to Captain Kostas Gritzelis, who is the Master of LOUIS AURA. He made us feel very welcome and invited us to visit the Bridge for departures or arrivals if we chose. We certainly did and could immediately understand why this sociable and obviously efficient Captain was so popular with all his passengers. We sailed away from the island of Kos and looked forward to our evening arrival in Symi. 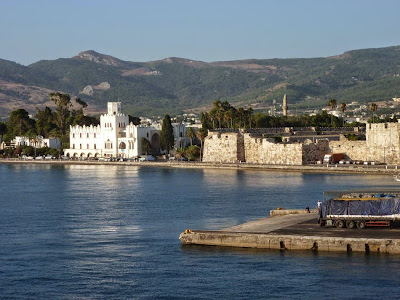 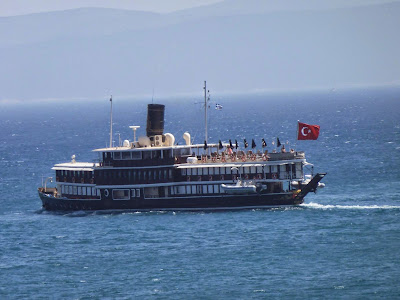 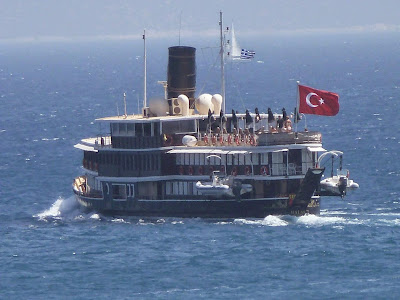 Another view of Halas 71 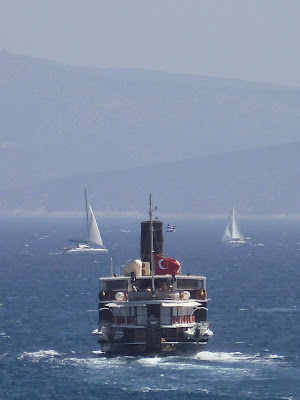 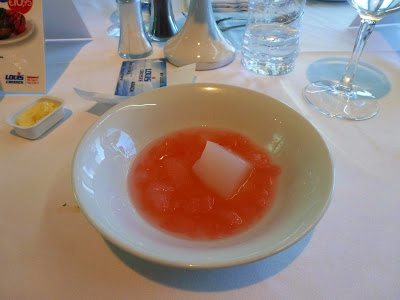 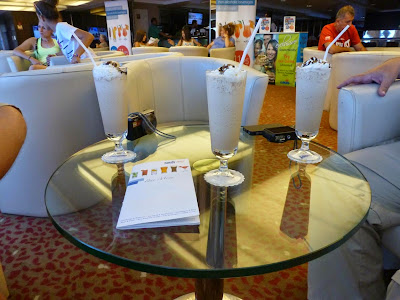 Much more to our taste - Frozen Vanilla Capuccino 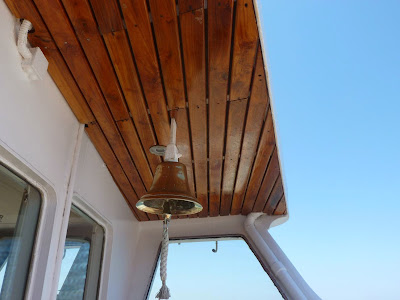 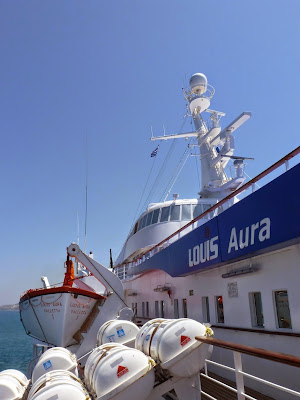 View from the Bridge