METAMORPHOSIS: FROM LINERS TO CRUISE SHIPS

This is the title of a wonderful exhibition presented by the Fondazione Fincantieri of Italy from 30th September to 17th October 2017, in the Galleria Comunale di Arte Contemporanea in Monfalcone (www.metamorfosi.italianliners.com). Many of us will have heard of the famous Italian shipbuilders (https://www.fincantieri.com/en). The Exhibition is curated by Maurizio Eliseo and Nicolo Capus.

Maurizio Eliseo is a freelance lecturer in the technology of maritime outfitting at Italian and foreign universities and works for some of the principal shipping companies in the world as a consultant in the design, construction, maintenance and management of cruise ships. The author of fourteen books, his maritime archive is one of the biggest in the world. A recognised photographer, graphic designer and model maker, he also co-ordinated the fitting out of the public rooms of Cunard's QUEEN MARY 2 when she was being built in 2003. He is the recipient of the Mitchell Award in 2001 and the Silver Riband Award in 2010.

He has now curated this Exhibition , with Nicolo Capus, which recalls the events leading up to the creation on 29th December 1959 of the Fincantieri company.

"The Exhibition recalls the time when the 'Sixties closed the age of the legendary ocean liners but initiated that of the modern cruise ships and the famous shipyard at Monfalcone was one the participants in the process. Nicolo Costanzi had designed the MICHELANGELO and the RAFFAELLO, which were intended to replace the SATURNIA and VULCANIA which had been built at Monfalcone". Anthony Cooke continues: "In 1959 when it was decided to proceed with the construction of the two liners, the Monfalcone yard had an extraordinary load of work already in hand and did not have two slipways available. It was decided that MICHELANGELO would be built at the shipyard at Genova Sestri and that RAFFAELLO would be built at Monfalcone. For the first time, two identical passenger ships of huge tonnage would be built in different shipyards at a great distance from each other."

Anthony Cooke's translation of Maurizio Eliseo's text continues: "To make this possible, on 29th December 1959 the Fincantieri company was formed in Rome and, with it, the extraordinarily successful system of construction which came to be known as 'platforms' and which made it possible to this day for Fincantieri to build sister ships simultaneously at their various yards along the length of the Italian peninsula. This was also when computers were introduced into the world of ship construction."

"Monfalcone was completing the two final passenger liners of the Lloyd Triestino company, the GALILEO GALILEI (1962) and the GUGLIELMO MARCONI (1963) and at the same time was building the first modern passenger ship to be intended exclusively for cruising - the OCEANIC. She belonged to the Home Lines, a company founded in the early post-war years by the Cosulich family in association with Greek and Swedish ship-owners. Egone Missio was appointed consultant to Home Lines for this construction; engineer Nicolo Costanzi and architect Nino Zoncada worked together on this difficult but thrilling project."

I've travelled on liners, cruise ships, ferries, little excursion boats and of course Mailships and thoroughly enjoyed each and every one of them over the years. When I heard about this Exhibition being curated by Maurizio Eliseo and Nicolo Capus I decided to make plans to travel to Italy for a long weekend, together with another ship enthusiast and good friend. Having met Maurizio several times over the years I wrote to let him know when we would be visiting the Exhibition and received a very happy and welcoming reply.

Saturday 30th September 2017
We flew from London Gatwick Airport at 7.30 a.m. heading for Venice in Italy. A treat at the airport had been an invitation to the BA (British Airways) Lounge from my travelling companion, where I happily enjoyed coffee whilst watching the aircraft movements.

As we flew into Venice I could see six cruise ships in the port, and I am looking forward to having some time there tomorrow. Today the blue sky was cloudless and the sun warm as we located the car hire company and started our journey northeast towards Monfalcone. Once we were on the motorway the first satnav instruction was to 'drive 90 kilometres on this road'! Well, that was straightforward enough and, despite a short diversion for road works, all was well. I could then let Maurizio know of our estimated arrival time at the hotel where he would meet us.

The plan had been to visit the Exhibition but he had arranged a great surprise for us first, which was to visit the vast shipyard of Fincantieri in Monfalcone.

We drove straight to our hotel in Via Cosulich, which seemed an appropriate name, and checked into our rooms; Maurizio met and welcomed us to Italy and to Monfalcone. He then took us into the attractive small town for tea before driving to the huge shipyard that is Fincantieri. 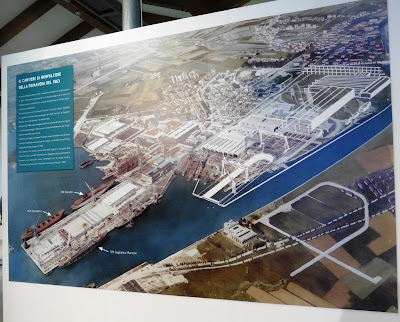 The Fincantieri site in 1963 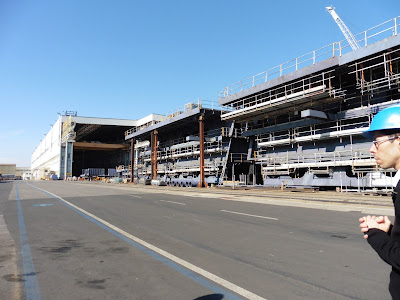 Near the start of our tour


We were introduced to the Chief of Security at the Monfalcone shipyard, who promptly handed out hard hats to be worn during our visit. We then met the Fincantieri Foundation Guide for Monfalcone, and both men accompanied us during our tour as we were driven around much of the huge site. The Monfalcone shipyard has an area of 724,000 square metres, of which 227,000 are covered. It was founded in 1908 by the Cosulich family.

During each 'walkabout' we saw where the various components arrived on site, where they started to be engineered and put together, where they started to look like ships and components for ships, where they went into dry dock, and finally where they entered water for the first time. During our tour we had also been introduced to the Fincantieri Foundation Director, and the Director of the whole Monfalcone Shipyard, who had each stopped their cars to come and say hello. 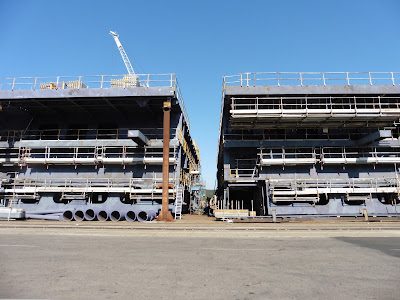 Something else being built 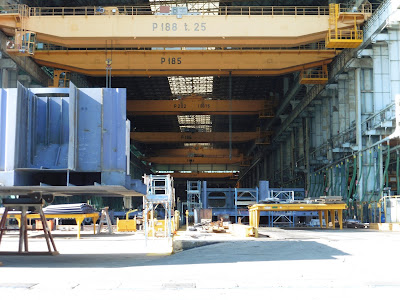 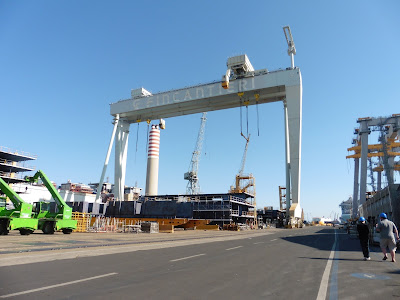 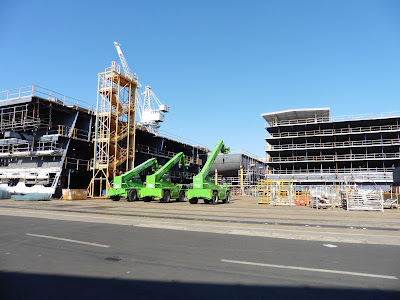 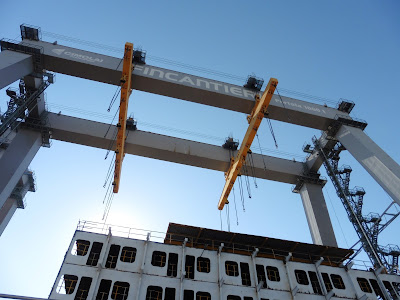 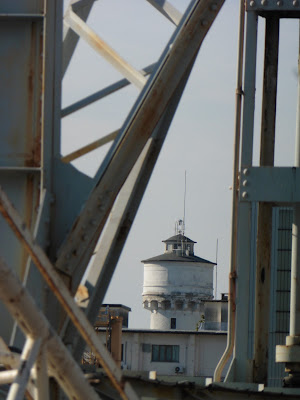 A water tower back in the town 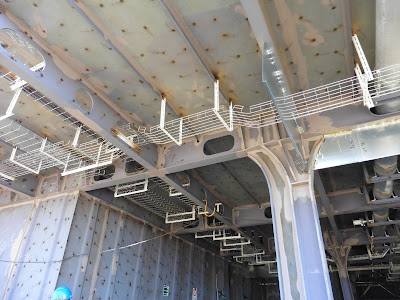 Some components being built upside down 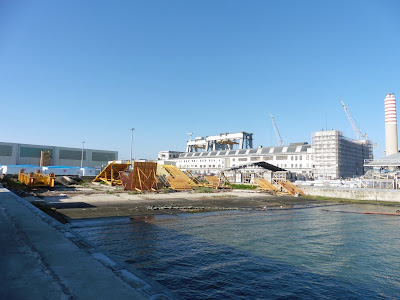 No longer in use


All the while we had been aware of two huge vessels far ahead of us, in the water, with white-painted hulls gleaming in the sunshine of this September afternoon. Finally we were driven close to these two new cruise ships, and could walk around and take more photographs.

We could see the work in progress on MSC SEA VIEW and MSC SEASIDE, although there was no sign of human activity. 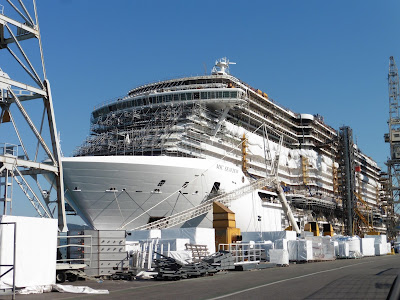 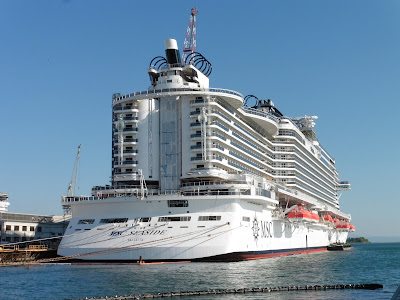 Maurizio told us that this morning there had been about 9,500 people working in the shipyard and on these two ships. Now, mid-afternoon, probably 2,200 shipyard workers would be on board the ships and working hard on the internal fittings, but none were visible to us. We felt extremely privileged to be in the Fincantieri shipyard here at Monfalcone.


Ships seen: cruise ships in the port of Venice as we flew over, incomplete MSC Sea View and MSC Seaside, in Fincantieri's Monfalcone shipyard