U-C Dolly would like to send you the Season's Greetings, and best wishes for a happy and healthy New Year in 2010, with lots of interesting ships to travel on or visit. 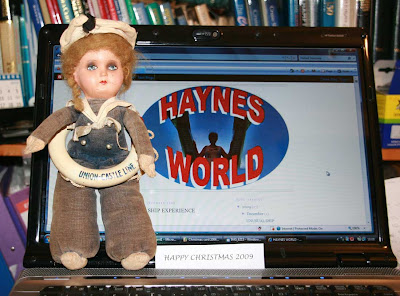 Stars in my eyes


I have always been fascinated by the position of our Earth in the solar system, and the increasing knowledge we are gaining from earth or space travel. I remember sitting in front of a television in the 1960s for example, watching the first space travel, and then the amazing Moon landing. None of us who saw that will ever forget it.

Earlier this month I read that here in the Northern Hemisphere we should be able to view the annual Geminids meteor shower. I knew about the annual Perseid meteor shower in August, when the Earth passes through a stream of dusty debris from the comet Swift-Tuttle, but this was something new to me. I read that the annual Geminids meteor shower would be easy to see this year because it would be nearly the new Moon, so there would be less moonlight to obscure it. I gather that meteor showers result from dust which has been blown away from comets which have passed near the sun. This time however the Geminids meteors would come from the tail of an asteroid rather than a comet, and would burn more brightly. They would be about the size of a pebble. The warmth of our star would melt part of the icy meteor, releasing rock or metal fragments, and this is what could be seen at night on 12th, 13th and 14th December with the naked eye from the UK.

So at 10.35 p.m. last Sunday, 13th December, I decided to brave the below-freezing temperatures of this part of the South of England. The night sky was clear and there was no artificial light around, so I could look up in the heavens in an easterly direction and hope to see some of the Geminids meteors. Within just a few minutes I saw a beautiful shooting star - one of the meteors! Once I could see where it came from, I went into the back garden and during the next eight minutes I saw eight more. They were an amazing sight. The piercing cold drove me indoors but nine meteors sighted in just nine minutes made for a memorable event. I was truly standing outside with stars in my eyes...

I always enjoy reading about ship things happening on the other side of the Atlantic. I've just seen a piece of advertising material about the virtual christening of Princess Cruises' OCEAN PRINCESS. She was built in 1999 for Renaissance Cruises as the Motor Ship R FOUR, then sold to Princess Cruises with a name change to TAHITIAN PRINCESS. Part of it said:

I really fancied being a ship's Godmother - the only time I'm likely to get THAT opportunity - so I logged on to the website. Suddenly I was whizzing off to Singapore, the bottle of champagne was right in front of me and hurtling towards the ship's hull, the whistles sounded and, guess what, I am now a virtual Godmother to OCEAN PRINCESS. It cost me nothing, except for the short time involved in giving a few personal details, and I could see my first name amongst the 'cloud' containing the names of other Godmothers. I was informed that $1 would be donated by the company to the New England Aquarium on my behalf, and the same would be done for each of the other 24,999 Godmothers to the ship!

Wow, that was fun - what a brilliant piece of advertising.
Posted by U-Cdolly at 9:43 am