I went to Paris by Eurostar train from London's St. Pancras International station, on Friday 16th September, and it was a most enjoyable trip. The engine was called Michel Hollard, the depot name on the side of it was Le Lande, and I was in carriage 17. The weather was clear and warm so I could see a lot of the English and French countryside during the 2 hours 21 minutes journey. 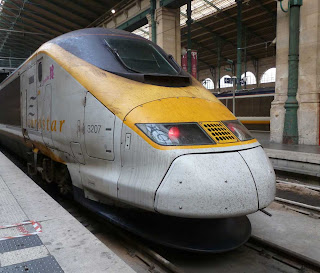 I am given to understand that five trains that have broken down in the past have all been maintained at the French Depot (Le Lande) and driven by French drivers, so I was happy that my journey had not been delayed in any way.

I went to see the Eiffel Tower, which is still so eye-catching. 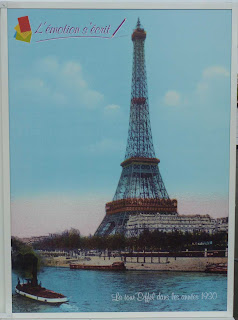 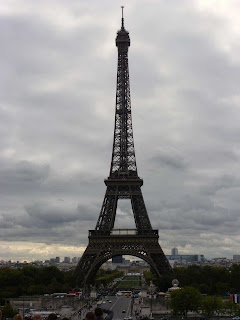 My visit was planned so I could visit the FRANCE Ship Exhibition, which proved to be fascinating, and several times I felt as if I was on board, amongst so many cabin and room settings, and details of the construction and sailing of this ship. 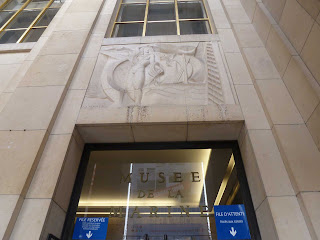 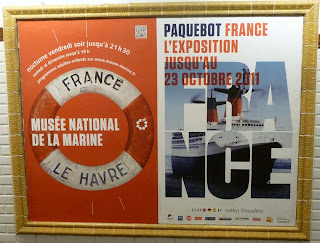 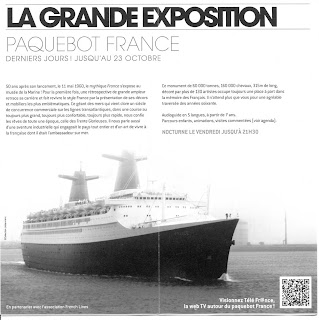 I went also to Galeries Lafayette, which looked so ordinary a building from the outside. 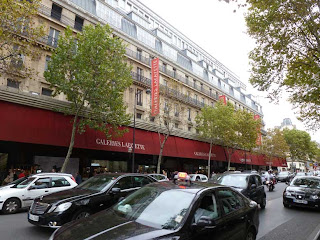 Inside however it was absolutely stunning, with a huge glass dome of glorious colours, theatrical design, balconies on each floor facing inward, rose-coloured lighting in places and lots of people. The ground floor under the huge atrium and glass dome gave a spectacular view all around. What an amazing place, and so unexpected after the rather ordinary outside. 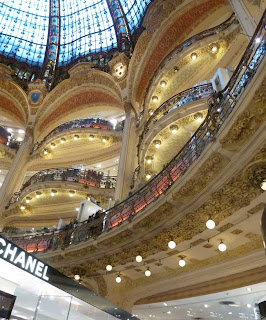 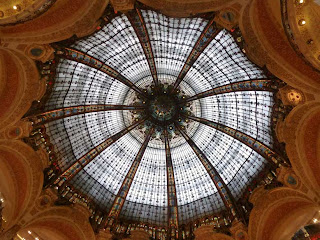 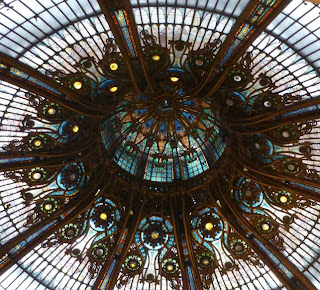 The next day I visited the Opera House, with free entry because it was Open Weekend in Paris, and again it was a spectacular sight, and a fabulous place. 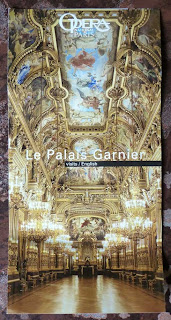 The Auditorium was not open as rehearsals were taking place. There was a circular entrance hall, and then we went up a grand staircase (obviously to see and be seen) to a long gallery – all chandeliers and gold. 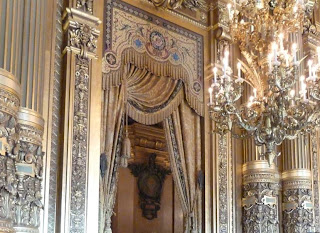 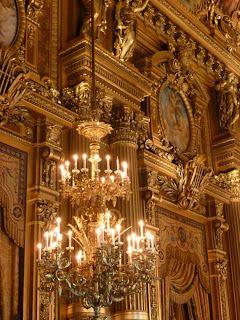 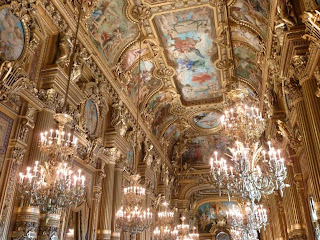 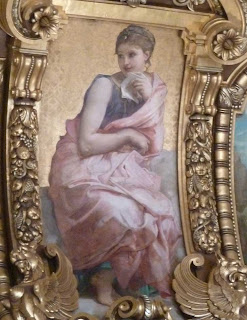 There is also a new Opera House in Paris, which looks very modern from the outside. The new and old Opera Houses get Euros 130 million per year from the French government as a subsidy. They also get visitor revenue and seat revenue. That visit was a wonderful free treat.

Lunch was at the Gare de Lyons, 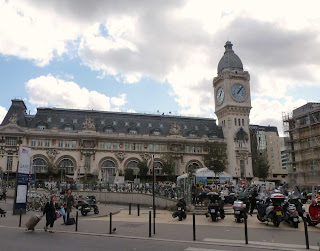 the Big Ben Bar, which was another surprise. 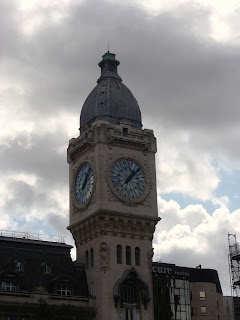 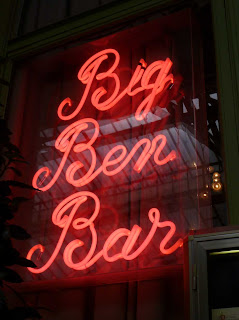 And this is a station buffet? I think not - it's fabulous! This is where the PLM trains used to depart, on their Paris/Lyons/Marseilles journey. 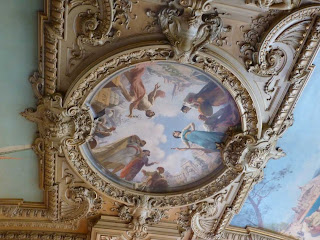 The various Salons here in the Station depicted some of the ports. We sat in the Salon Algerien which had an enormous picture on one wall, high up; there was lots of very comfy seating all around the room. 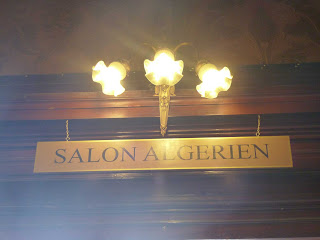 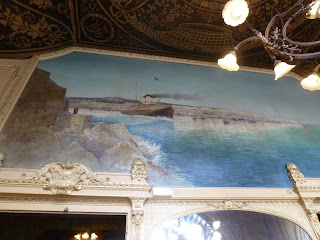 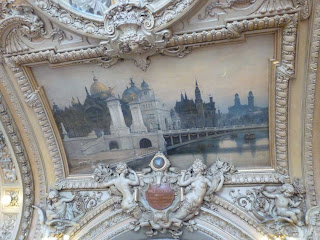 The cloakroom had posters outside, with more paintings and murals in the main Restaurant, and our snack lunch was huge and beautifully presented. I shall never forget this place and the kindness of my companion in bringing me here. As we left we saw a very contented white cat curled up and asleep in the corner of one of the huge Chesterfield settees. I knew how he felt. 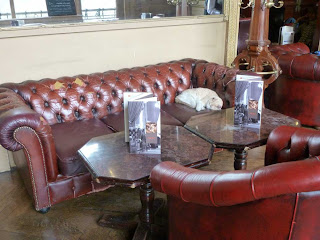 The next tourist treat was to see the Arc de Triomphe, 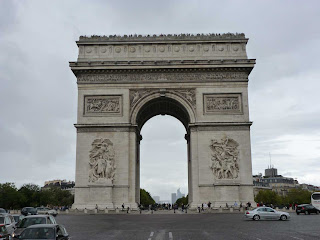 and then to make a quick visit to the famous Sephora store in the Champs Elysee. 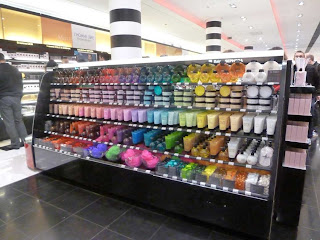 Dinner was enjoyed in a vast Art Deco establishment, La Coupole (Cupola), a very popular restaurant built in 1927; the dome in the middle was done in 2008 by 4 international artists, and the pillars were painted and mirrored too. There was lovely food and service, including a memorable fig tart. 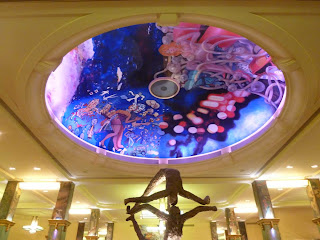 I returned home the next day, again by Eurostar train, at great speed and in comfort, which was an excellent ending to my enjoyable Paris weekend.
Posted by U-Cdolly at 3:55 pm 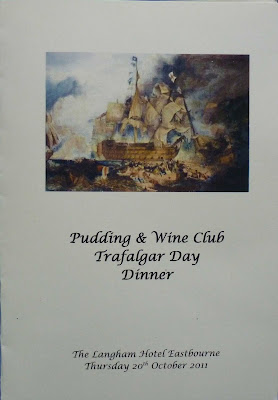 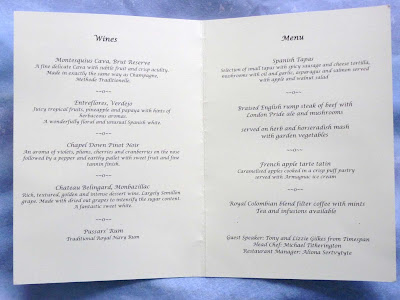