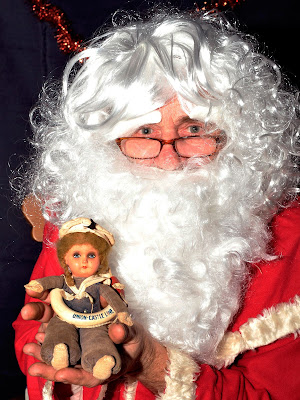 I took Union-Castle Dolly to visit Father Christmas recently, and this is a record of the occasion. May I wish everyone a very enjoyable Christmas and a happy and healthy New Year in 2017.

Best wishes from the real Union-Castle Line Dolly.
Posted by U-Cdolly at 12:54 pm

HOVERCRAFT & OTHER VESSELS Part 3 (the concluding one) - Brittany Ferries


22nd October 2016
MONT ST. MICHEL
Back at the Wightlink terminal we could disembark and return to the parked car, ready for another little journey - this time to the Brittany Ferry Terminal which is part of the Portsmouth International Port. On 20th October 2016 Brittany Ferries announced that they have just renegotiated a deal to continue sailings from Portsmouth International Port for the next eleven years. Two of us checked in here whilst the car was being parked safely, and then all three of us joined the queue to get the little bus to take us alongside our next ship of the trip. 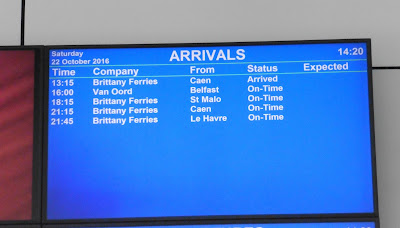 
This afternoon we are to sail on a much bigger vessel: Brittany Ferries MONT ST. MICHEL from Portsmouth to the port of Caen, the city in the Lower Normandy area of northern France. We were soon on board and enjoying the prospect of sailing from here in sunshine at 2.45 p.m. We were last on here in May 2013 and up on deck we could see an immediate difference around the funnel area. She was built and delivered in 2002, at 35,586 gross tons, but now we could see where the exhaust gas scrubbers have been fitted, to remove sulphur from their exhaust emissions. 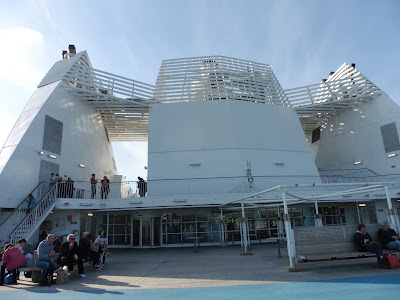 
The ship can carry 830 cars/lorries at full capacity, on decks 3,4,5 and 6; and 2,120 passengers in deck 7 aft cabins and deck 9 forward cabins as well as reserved seat lounges and other public rooms.

We were soon sailing and enjoying the views of HMS VICTORY, the Emirates Spinnaker Tower as it is now known (170 metres high and open to the public) and Spitbank Fort out in the Solent. The Fort was started in 1859 as one of four of Lord Palmerston's Forts to defend approaches to Portsmouth Harbour, completed in 1878 and fitted with guns. These were replaced with newer armaments over the years until the Spitbank Fort was sold by the Ministry of Defence in 1982. It is now a most unusually-situated private luxury hotel, although still a Scheduled Monument. 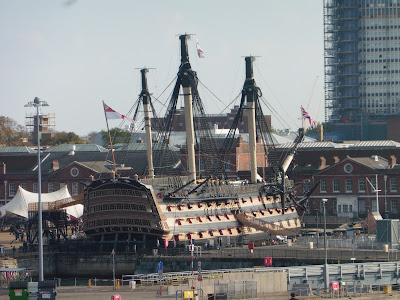 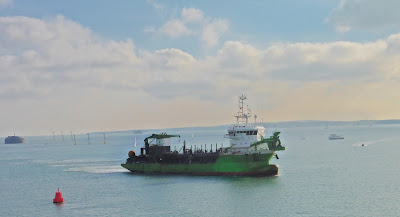 A hopper dredger named Reynaert, built in 2007, with a home port of Flushing in the Netherlands 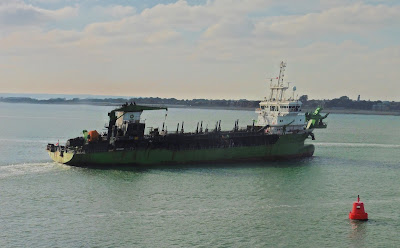 Making her way past us 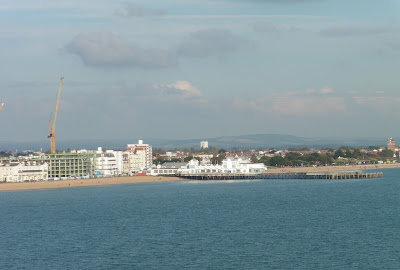 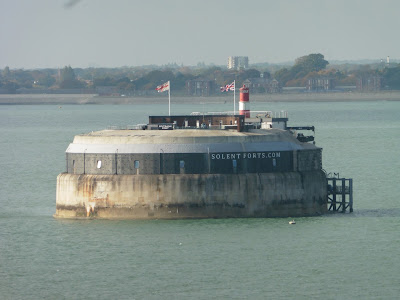 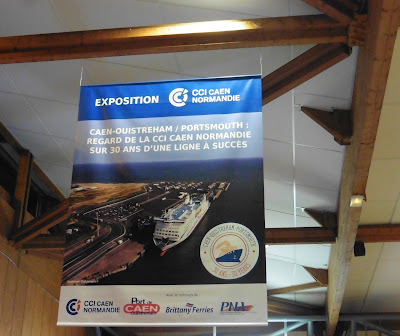 Our ship and route


On board MONT ST. MICHEL tea and cake was enjoyed in La Galerie Self-Service Restaurant with its forward views, and then we had the chance to 'show and tell' about our various ship-related purchases or events since we last met and travelled together. It was only last month (September) but we all seem to lead busy and interesting lives...

A hour or two later we had missed the Quiz in the main lounge, had missed the Wizard (!) entertaining the children in another public area, didn't want to see a film in the cinema, and realised it was time to enjoy evening dinner in the A La Carte Restaurant on board.

After that it was soon time to watch for the 9.30 p.m. arrival in Caen (Ouistreham) and disembarkation some time after that. We are booked to travel home again on the MONT ST. MICHEL overnight but still had to leave the ship, exit the terminal and could then enjoy a short walk in the dark fresh air outside.

When the call came to check in and board the MONT ST. MICHEL, we joined the inevitable queue and I admired the poster pictures I could see nearby. 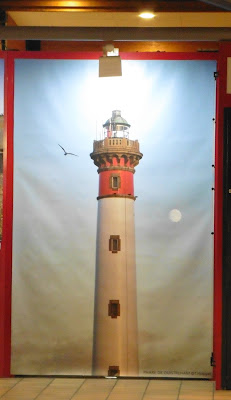 
Sailing time of 23.00 was fast approaching but the Security people had only just turned up so there were lots of delays at the first part of the queue as foot passengers were scanned and/or patted down, as well as putting luggage through the scanner. With luggage collected, Passports then had to be shown further along and this took up more time. We then had to get outside the building and onto a bus, to be taken to the ship. We noticed that some people had been so delayed that the bus left without them, but it was sailing time by the time we were on board, and presumably the bus went back to collect the remainder of the footies. That all seemed a little disorganised and time-consuming to many of us, but that was the way it was.

Back on board MONT ST. MICHEL it was good to leave weekend rucksacks in the cabin and enjoy the surroundings. I really like the flow of the design of this ship, and the various public rooms and staircases. They all seem very passenger-friendly to me.

Guide to Onboard Services 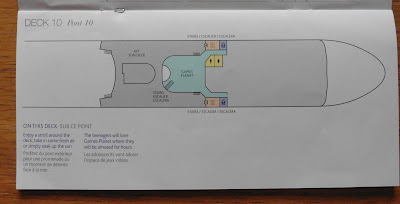 
We are to sail overnight back to Portsmouth so there was time for a short sleep before arrival at 06.45 a.m.


Sunday 23rd October 2016
That was indeed a short night on board MONT ST. MICHEL but breakfast up on the Deck 9 Le Cafe du Festival meant a good start as we headed into Portsmouth Harbour and disembarkation. It was barely daylight by the time we were on the quayside and saw the ubiquitous bus to take us to the terminal. We collected the car from the car park and I was then given a lift to the nearest train station, which certainly helped me.

I live in an area with frequent planned and unplanned strikes and cancellations by the Southern Rail company, plus staff shortages, so I was pleasantly surprised to discover a train leaving in ten minutes to a destination that would help me. I think I was the only passenger on board for a few miles, and there was no heating whatsoever - the train guard and I had a friendly moan together as he passed through my carriage - but at least I was on my way home.

Yesterday had been a FIVE SHIP DAY and what a contrast in vessels they had been, as well as an enjoyable day out.