Sunday 17th September 2017
My friends had planned to get up really early and walk down to the quay to catch the MOBY AKI over to Portoferraio at 6.30 a.m. and get breakfast there. In fact their plans changed and they sailed on one of Elba's Pink Panthers, the STELIO MONTOMOLI of Toremar. I believe they enjoyed more than 40 winks stretched out on the sofas on her lounges. She's essentially similar to her (half-)sisters so wasn't a massive target, but one friend hadn't sailed on her since she turned pink.

The main reason for sailing though was so they could come back on the MOBY KISS in daylight hours, after the busy evening crossing the previous day hadn't been ideal for photography.

I was still fast asleep, with an alarm set for the more civilised 8 a.m., so we were all happy.

I had a leisurely shower and hairwash (hooray for finding a hairdryer in the bathroom) and breakfast in the spacious dining room. I could look out at the sea and port as I drank my cappuccino - what a blissful start to a day. I packed my bag, chatted with the friendly receptionist and watched some of the ferries coming in and out of the port just down the road. The men arrived back and we could then settle the bill, pack the car and drive up the coast to Livorno for our next ferry trip.

Our schedule was always carefully planned by my knowledgeable friends but of course schedules are always subject to change, especially on the day. We arrived in Livorno ready to catch the MOBY ZAZA for her 2 p.m. departure but as we tried to check in we were told that the ship's arrival had been delayed by rough seas. Plan B swung into action, as we decided to go for lunch here in town, park the car, and then await the ship's arrival.

The MOBY ZAZA had been booked for the voyage to Bastia in Corsica, leaving Livorno at 2 p.m. and arriving in Bastia at 6.15 p.m. This would give us ample time to disembark from her and catch the MOBY DADA leaving at 10 p.m. for an overnight sail from Bastia to Nice in France. 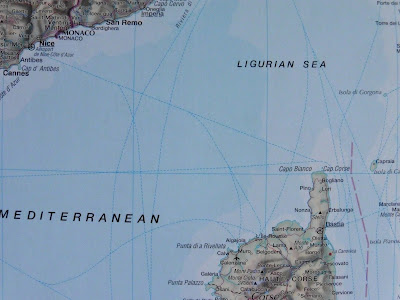 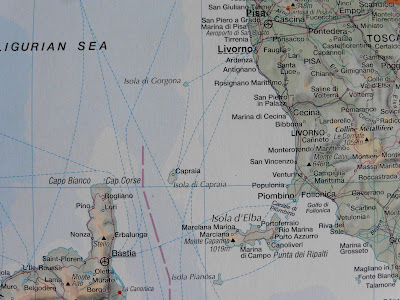 
A seafood and spaghetti lunch improved the situation and we were then able to check in and queue to get on board once ZAZA had finally arrived. 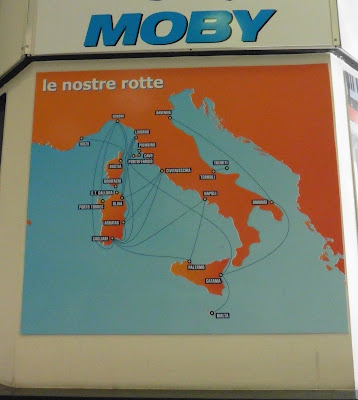 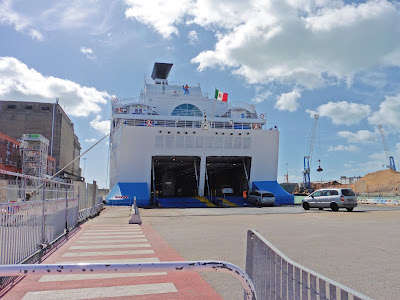 
Footies were allowed on first this time, so we walked along the broad yellow painted line beside the car deck and stepped onto the escalator up to the public decks. By this time it was 3 o'clock and we sailed 10 minutes later, just over an hour late. 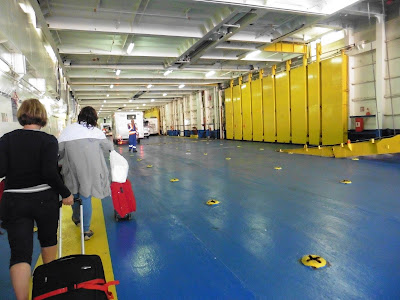 
Looking through the glass doors of the shop we could see that many items were on the floor, including soft toys and magazines. Oh dear, some green fluffy animals had turned turtle! 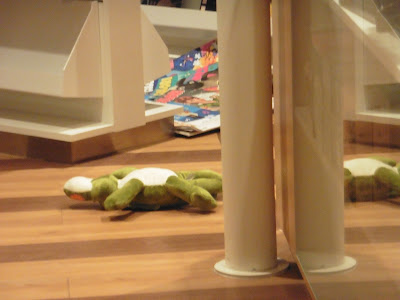 
Once we left the harbour and breakwaters the sea was rough but it was sunny, which created a rainbow effect on the spray. We enjoyed looking around the ship, which had been built in 1982, and was originally the OLAU BRITANNIA. We found old Moby signs from MOBY DREA and MOBY WONDER in some of the public rooms. 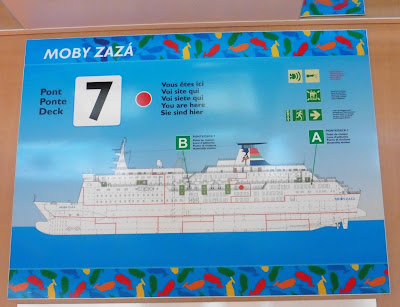 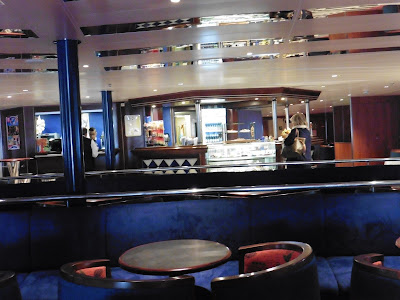 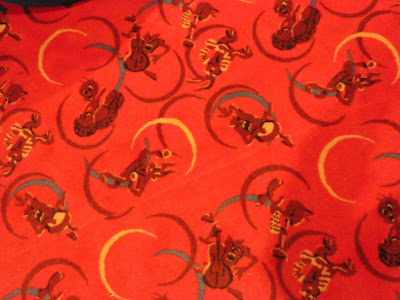 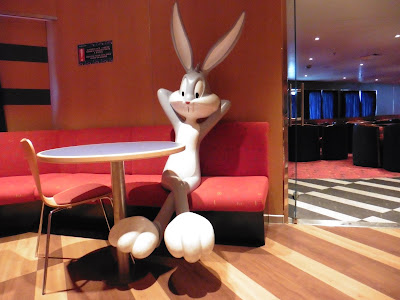 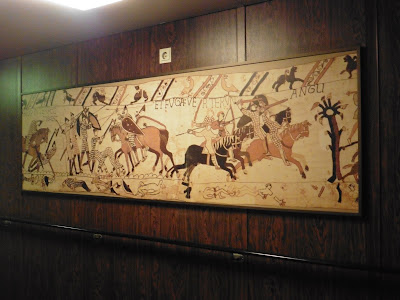 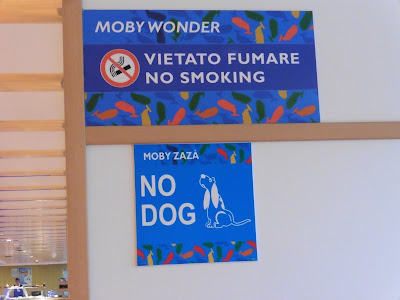 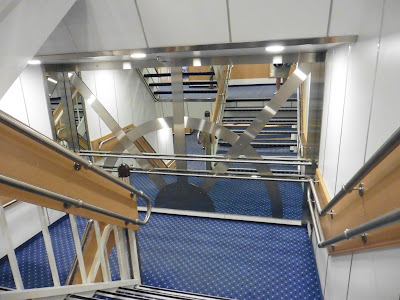 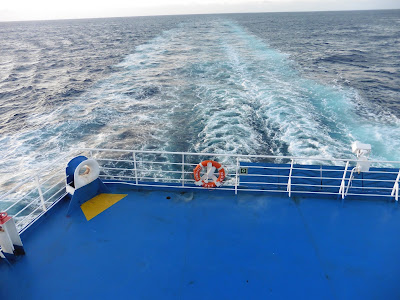 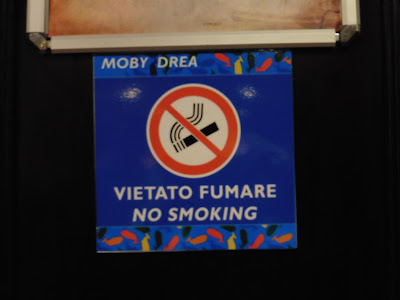 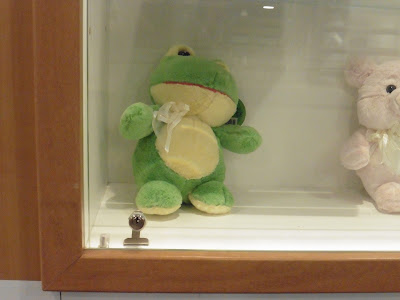 
Time went on and it became obvious that we would not be on time in Bastia; darkness fell and a visit to Reception informed us that our expected arrival time would be 9 p.m. That was bad news but it seemed possible that we might get our connection for the ship to Bastia. We decided to have a meal in the self-service restaurant as we would obviously not have time in Bastia and eating on MOBY DADA would be very late. 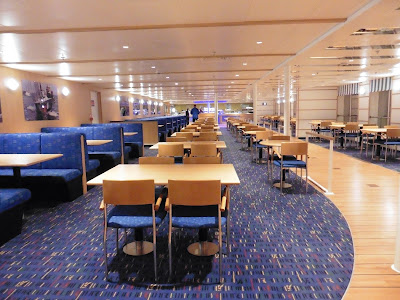 
We sailed on and on and on through the darkness, still in rough seas, until we arrived off the port of Bastia at 9.40 p.m. and then had to wait for the Pilot. We visited Reception again to explain that we would very much like to get off the ship quickly please, to be able to catch MOBY DADA, and the Reception member of staff said that the ship would know that. We had to be content with that and made sure we were at the head of the queue of people waiting to walk off the ship.

Our ship moved towards the port, and we saw MOBY DADA nearby on another berth in the harbour, as we manoeuvred in. We were allowed to disembark at 10.20 p.m. after a 7 hour journey between Livorno and Bastia which should have taken 4 hours. We raced off but were only in time to watch her sail past us breathing very heavily on the quayside. Our bookings were for sailing from Bastia to Nice and back to Bastia, but counted for nothing now.

The only plan was to find accommodation for the night and re-schedule everything for tomorrow which is what we were able to do. A nearby backstreet hotel was able to offer beds which we were happy to accept. 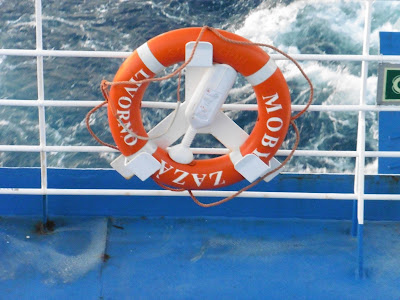