Life started early this morning on board ANCONA sailing from Split to Ancona, so that we could accept the invitation to visit the Bridge. That was such a treat, as was the Purser taking us into the two forward VIP suites to see the original fittings from 1966 when she started life in Gothenburg as M/S SAGA.

Soon it was 7.30 a.m. and arrival on ANCONA. This was our very last opportunity to sail on this Blue Line ship as she will not get through the 2010 SOLAS Regulations which come into force on 1st October; there will no longer be the chance to sit in the Bar area of Distinguished Class…

After coffee and breakfast at a waterside café, we left the luggage safely in the old Ferry Terminal and watched SVETI STEFAN II arrive in the port – she is to be our overnight ferry for the next part of our journey from here in Ancona, across the Adriatic Sea to Bar in Montenegro. 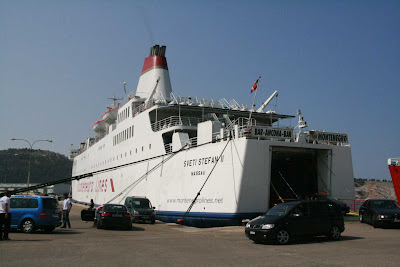 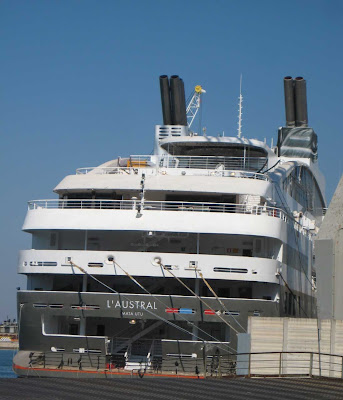 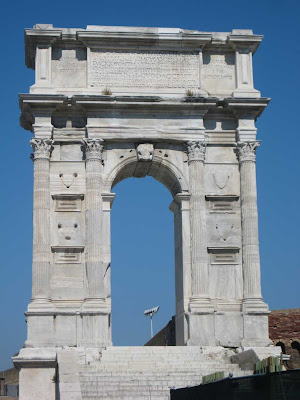 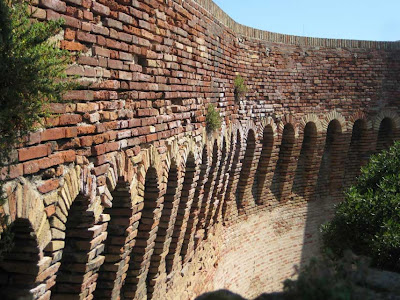 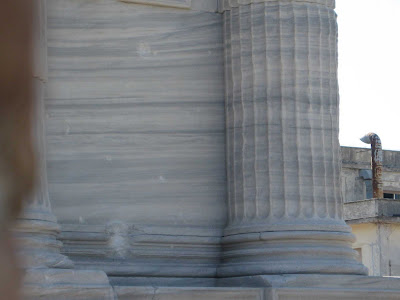 After a lovely hot day in Ancona, we checked in at the new Ferry Terminal – no luggage lockers here – then it was back to the old Ferry Terminal for a good meal in the 1st Piano (the first floor) restaurant, with its wonderful open windows looking out onto the port.

My ferry friends had sailed on SVETI STEFAN II before so thought they knew what to expect, with no private facilities, but descending so far down below the car decks came as a bit of a shock when we saw what was actually in store for us. The public rooms were charming in parts, and we liked the original art work, 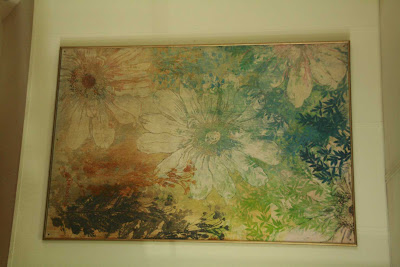 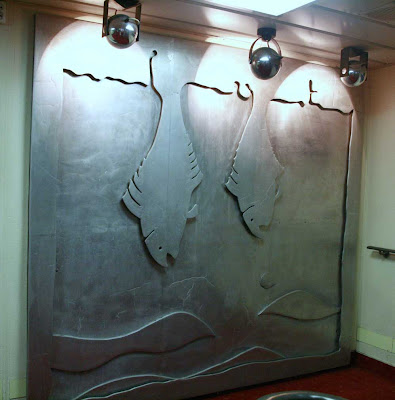 but things had obviously deteriorated since Matt had last been on board.

I found the Ladies toilets absolutely disgusting. There seemed to be no facility to flush the toilet that I could see, even though the workings were not covered up. The shower cubicles were equally awful. I took some pictures of the toilets (and their contents) to show the Reception ladies. They were horrified and apologetic, and immediately delegated one of their number to don the rubber gloves and get down there and do something (poor girl). We went down again and she could see that I had been telling the truth. She showed me how the toilets were supposed to be flushed, by the tiniest little knob on the back, but indicated that there were some disgusting female passengers on board. As soon as she finished I was more prepared to use the facilities, but most of the ladies toilets on the ship were nearly as bad.

She was built in 1973 as PRINZ HAMLET (2) for the Harwich-Hamburg service of Prinz Ferries. From 1981 this service passed to DFDS, who then bought her in 1987; Stena Line bought her in 1988 (STENA BALTICA) and owned her for all of a month; they sold her on to Polferries and she operated in the Southern Baltic as NIEBOROW. She was then sold on in 2002 to Adriatic Lines (Montenegro Lines), where she became SVETI STEFAN II. We think that little money has been spent on her since then.

We left Ancona at 4.45, watching from the deck rails. Everywhere seemed very grubby, including the plastic chairs on deck – most of which were locked together. Ah, that reminds me of sailing on the memorable MAJESTIC in July 2008 from Barcelona. On this ship we will all just try and enjoy what we can. This included seeing SCOTIA PRINCE sailing nearby.

I enjoyed a cup of tea in the Cocktail bar near the Restaurant, with its sky blue tablecloths and views of the calm sea outside, and bright pink-painted bar, and was soon joined by the others. Some hours later we had a simple dinner in the Restaurant and, after a last walk on deck, took to our beds. I remember that I could hear the lapping of the water beside my left ear when I was lying in bed that night – we were certainly well below the car decks.

This hot ship has been an endurance for us, without any air-conditioning or fresh air inlets below decks, so that at 6 a.m. I had to get out of the cabin. All the female toilets smelt of ammonia and I didn’t dare breathe in too deeply until I reached the open deck. The male toilets were all occupied or I would have gone in one of them. 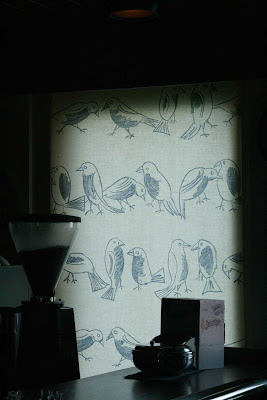 I went in search of coffee or tea, but the coffee shop was closed so I took a photo of the delightful birdie wallpaper barely visible in the gloomy room, and found breakfast available in the Restaurant.

We enjoyed the sail up the Montenegrin coast, in beautiful hot clear sunshine, amazed at the dramatic sheer and craggy mountains so close to the water’s edge. 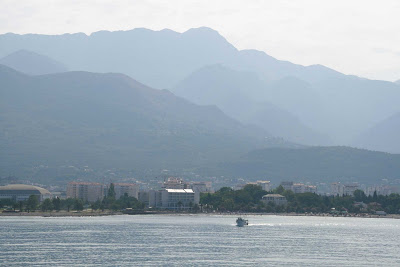 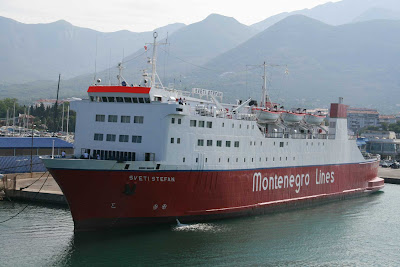 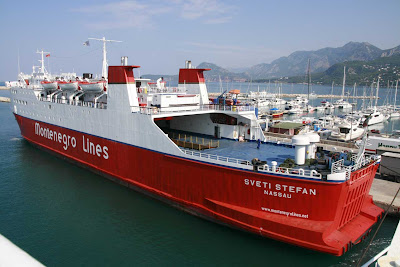 We arrived at Bar, in Montenegro, at 9.15 a.m. and were able to leave our bags in the terminal office until later in the day; 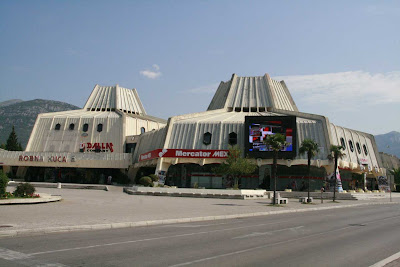 we walked around the town enjoying the architecture, the sight of a miniature red London bus being used as an advertising gimmick, 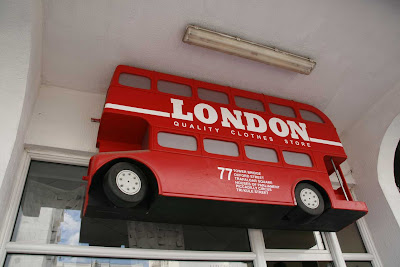 and parents with a child in a pushchair walking along with a large SpongeBob SquarePants balloon beside them. 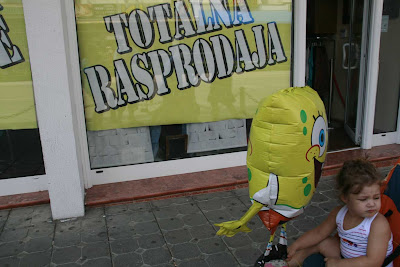 Not a lot of people would recognise this balloon character but I believe it has great significance in some people’s lives.

New places always provide new views on life, and our next plan was to take a taxi along the coast to the famous island of Sveti Stefan itself. Described by some as an islet, it contains a 15th century fortress, which became a fishing village, and then a tourist resort. 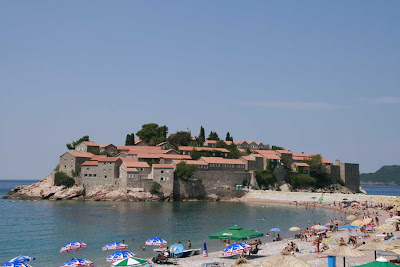 Now it is privately owned and closed to the public so we were not even allowed to walk along the short isthmus to step on the island. It is in the process of being turned into a ‘high end’ tourist destination 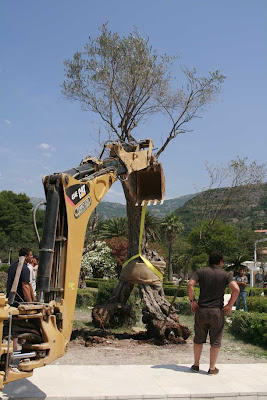 of guest cottages and suites (Aman Sveti Stefan), and it looks a delightful place. We enjoyed watching and hearing a noisy discussion about where to replant an olive tree, which was suspended in mid-air whilst the decision wasn't being made. Ah well, photographs and lunch, and back to reality.

Back at the terminal my friends went off to photograph ships in another part of the harbour, whilst I walked in another direction. That’s how I met a very pleasant Customs officer called Daisy (ok, so I went the wrong way) and we entertained and amused each other for a while with talk about English things (she wanted to practise her English), car holidays to Greece, our journeys and my companions, Wimbledon tennis and the delicious fruit she gave me in her air-conditioned office.

The rest of the day was spent admiring the scenery, the air and views, 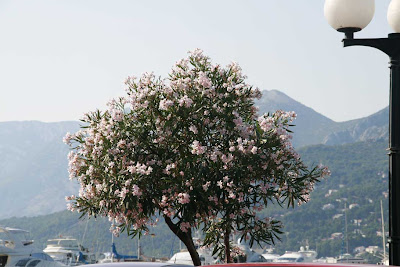 and a meal in an upstairs restaurant in the little terminal building, before checking in to sail on SVETI STEFAN itself for the 10 p.m. departure from Bar, heading overnight for Bari in Italy. We saw a turntable down on the car deck as we went on board. 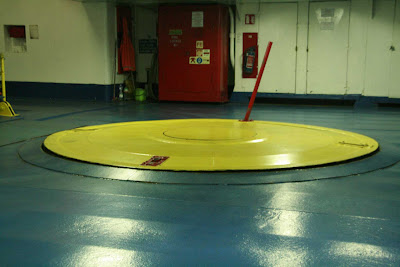 This is a 1977 vessel built for Brittany Ferries as M/S CORNOUAILLES, then chartered to SNCF, British Channel Island Ferries, then Condor Ferries 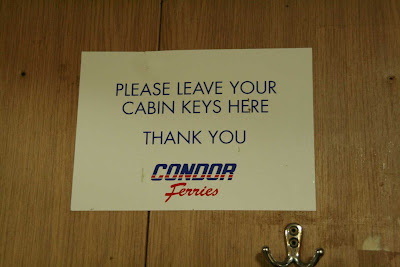 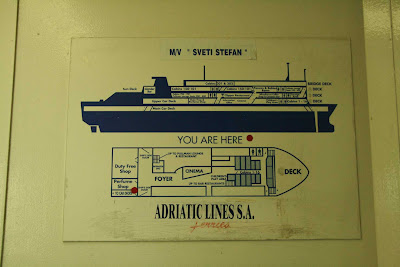 to Montenegro Lines and sailed from Weymouth (after lay up) to Montenegro. This ship seems more comfortable for us and the other passengers; World Cup football was showing on every television in the public rooms, so that may have been why we sailed late. 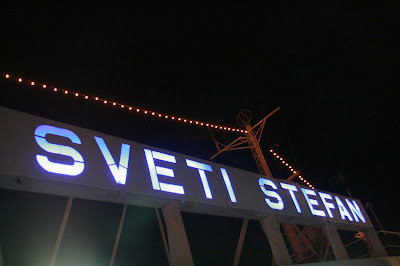 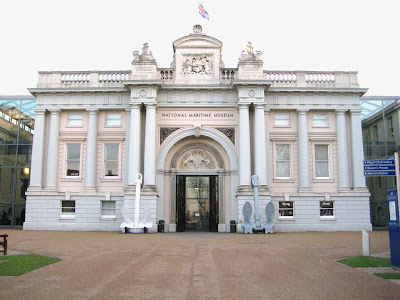 I was recently invited to be a guest blogger for the NMM, because of my particular interest in the current WATERLINE EXHIBITION. 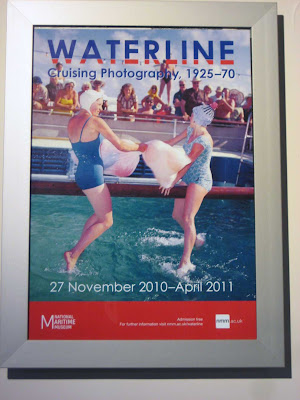 This is the poster for the micro-Exhibition;

this is the cover of the wonderful publication from the NMM's Mr John Graves; 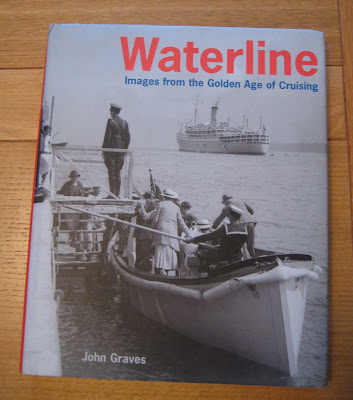 and this will take you to my first guest blog piece, so I hope you enjoy it.