We arrived in Cadiz at 9.00 a.m. as scheduled and it was hot and sunny, how wonderful.  We are berthed alongside, right in the city.  Breakfast was next and then it was time to go ashore and walk in this ancient city.

As we disembarked from TUI DISCOVERY 2 we realised we were not alone in the port, as there were several other cruise ships around us. 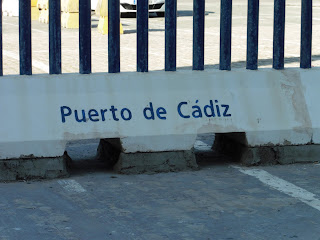 We decided to walk around and see them and take photographs.  Different ships of course have different home ports and itineraries, and it is always interesting to see something unexpected.  Today we could look at SILVER WIND and SIRENA,  as well as our lovely vessel.  We also saw the sign marking the Pilot Station, and then public maps of the city and also the cruise ships area. 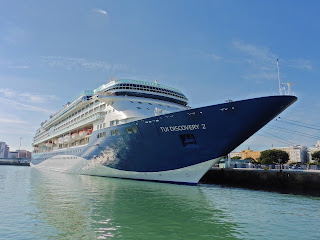 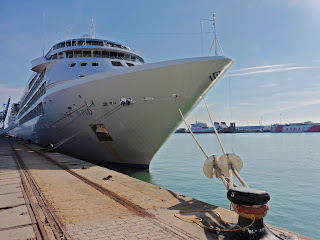 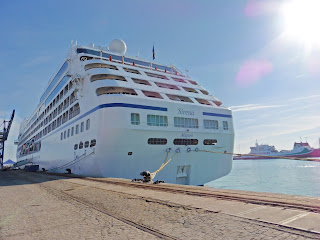 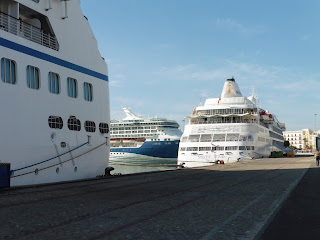 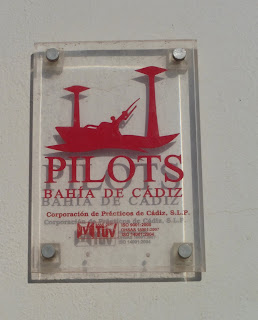 Back at the terminal building we could leave the security zone and head into the ancient city of Cadiz. 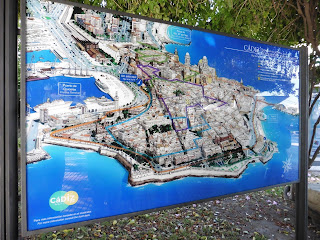 Public map of the city 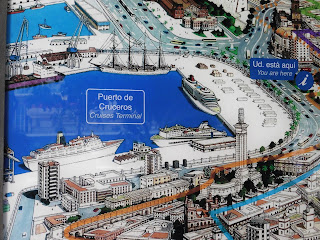 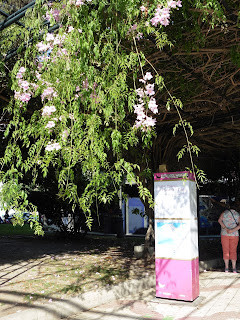 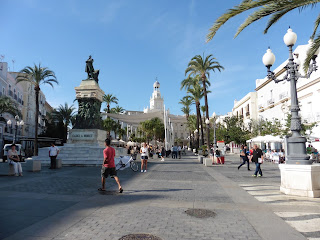 Just a few steps into the main area I decided to look back over my shoulder and discovered DISCOVERY's funnel and logo right in my sights, which was fun. 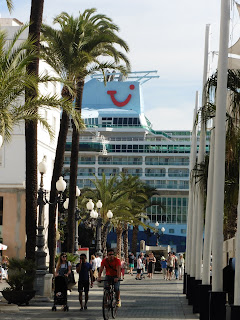 We continued our walk admiring the many interesting buildings and sights on the way.  I noticed two in particular, enhanced by the sunshine. 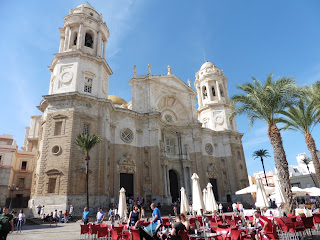 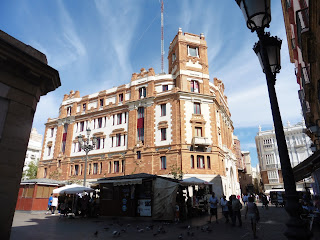 On an English Autumn Sunday I was very happy to take a train to London Gatwick Airport ready for what seemed like an unusual experience for me:  a package holiday with flights included.  I had booked to sail on the good ship DISCOVERY 2, ostensibly a TUI ship, but a Thomson Cruise.  Many of us in the UK have occasionally been puzzled about the change of name from Thomson Cruises, which has such a good reputation and following, here in the UK at least, but no matter.

I read that she was built at St. Nazaire in France, in 1995, at 69,130 gross tons, for Royal Caribbean Cruises.  She was named LEGEND OF THE SEAS.  In March 2017 she was sold on to TUI UK, and in April 2017 she was named TUI DISCOVERY 2.  This is the ship we will be sailing on today, just a few months after she joined TUI.  Just for the record, next month, in October 2017, she will be re-named MARELLA DISCOVERY 2.

Once at Gatwick airport I met up with one of my good friends and we checked in for a 4.30 p.m. flight from here to Malaga, Spain, for 5 nights on board the ship.  In fact there were a couple of no-shows for the flight, so their luggage had to be removed from the hold and finally we were able to taxi and take off..

By this time I was so very grateful I had chosen to book an aisle seat because the passenger on my left was the largest man in the world!  He really must have been, and he was travelling with a female in the window seat next to him.  I think the steward had to bring him a seat belt extension to comply with airline requirements.  We are on a TUI  Dreamliner, which is noticeably big and spacious and obviously takes a ship-load of passengers from the UK.

During the flight I bought three scratch cards and won a £2 voucher for use on my return flight, so that was a bit of a bonus.  During the flight one announcement was made requesting  that "Anyone wanting Champagne etc. should tell staff so bottles can be put on ice."  That was the moment when I truly realised I wasn't on an easyJet flight but a Thomson one!

My friend had been allocated a different seat for the flight but we met up again on landing at Malaga airport in the darkness.  We collected our bags in the airport terminal and then took them across to one of the coaches waiting for us all.  It was a fast ride to the port terminal where the big new TUI DISCOVERY 2 was at a berth and waiting for us to check in. We put our bags in the cabins and then went to see about dinner. 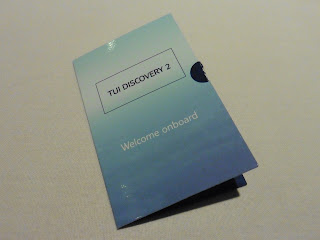 In the Upper deck of the Restaurant was the 47⁰ Gallery and this lovely and lively area proved an excellent choice.  I think I was charmed as soon as we sat down by the presentation of a small plate of tasty  looking Italian goodies to share, which were described on the Menu as "While you are waiting".  The meal that followed was very enjoyable too, and most welcome after  a long day of travelling. 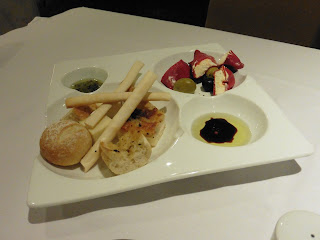 "While you are waiting"

On deck afterwards we joined the other cheerful passengers as we waited for our 10 p.m. departure. 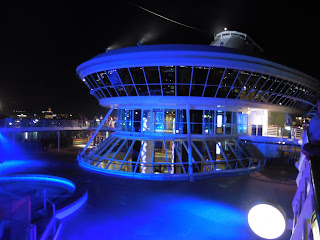 Top of the Atrium on deck 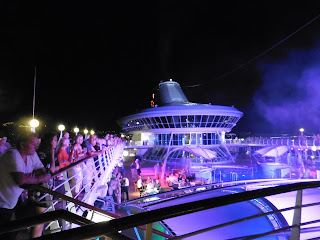 Enjoying the music and dancing on deck

This time came and went as the music and dancing continued in the balmy warmth of this southern Spanish port;  then we noticed that on the dockside more passengers were beginning to arrive and embark on TUI DISCOVERY 2.  The check in for them must have taken a while because we finally sailed at 11.30 p.m. Everyone had had a long day and most of us chose to leave the decks after sailing.

As we sail away we have started our 5 night 'Spanish Escapes' cruise from here in Malaga, then calling at Cadiz in Spain, Gibraltar UK, a day at sea, Funchal in Madeira, and ending in Santa Cruz, Tenerife.  We disembark there and fly back to the UK on a new 787 Dreamliner aircraft of Thomson Airways.

Visit to Seven Seas Voyager
20th June 2003
I belong to LinersList@groups.io and there has been recent discussion about the ship SONG OF FLOWER. I knew I had not sailed on that ship, but I remember seeing the ship's bell on another vessel.  I have now located a few photographs I took on board Seven Seas Voyager on 20th June 2003 and so here are a few pictures of the bell which was on Deck 11 in the Observation Lounge Bar. 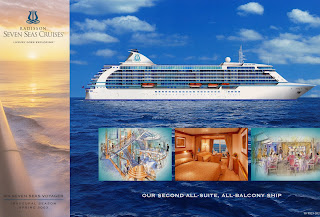 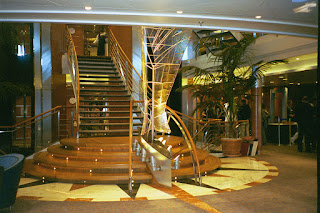 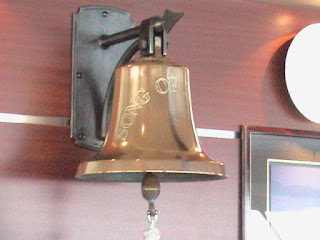 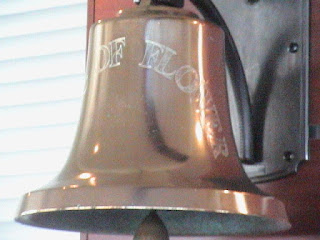 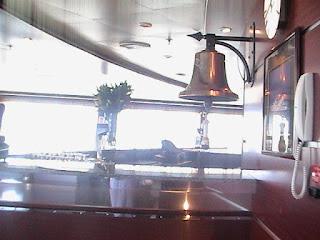 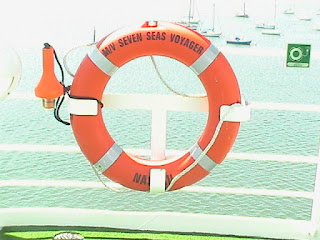 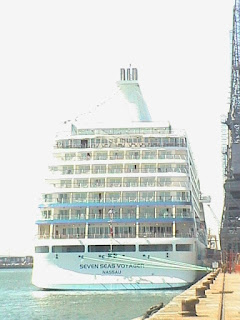