METAMORPHOSIS: From Liners to Cruise Ships (Part 5, the final one)

After many photographs were taken, we had to head back to the hire car and take to the road again, this time to the fabled city of Venice. We waved farewell to the shipyard, to the eye-catching water tower that somehow managed to survive war damage, the MuCa Museum with its details of the great entrepreneurial Cosulich family, and this delightful part of the Italian coast.

We headed south-west from Monfalcone on the motorway and were soon checking into rooms in a small hotel near Venice Airport; tomorrow we had early flights back to the UK. Once in Venice we bought tickets for the vaporettos, 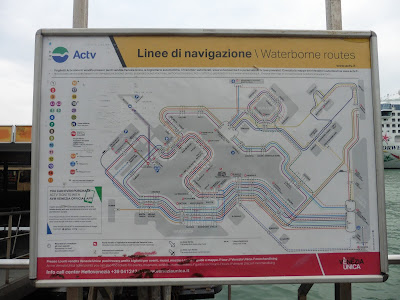 
and I remembered once being asked if they ran on vapour (that amused me). The blue sky of the morning had clouded over, and things began to look slightly grey and the water more ruffled. Ah well, we were in Venice and that couldn't spoil its charm. 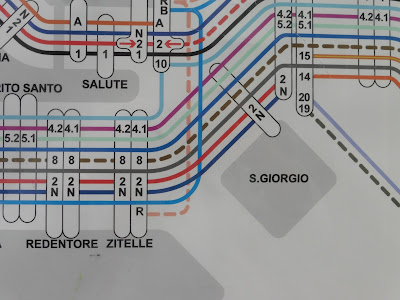 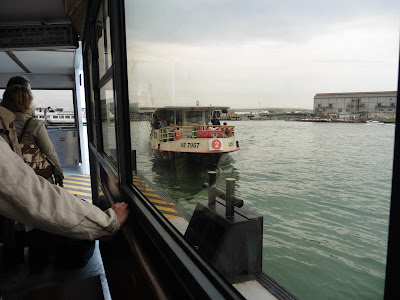 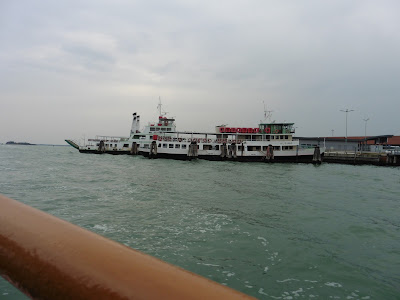 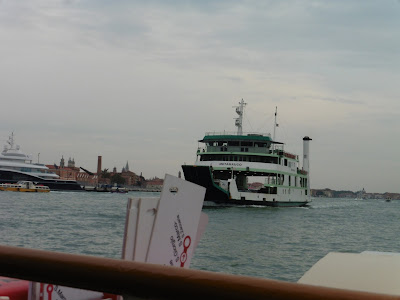 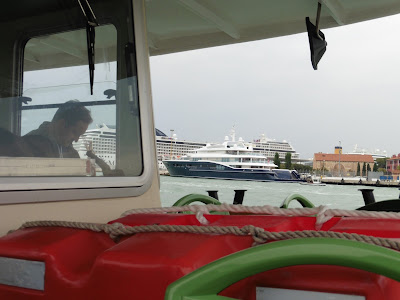 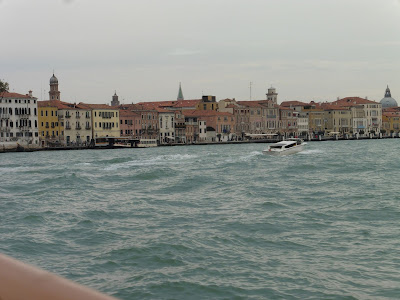 On the opposite bank 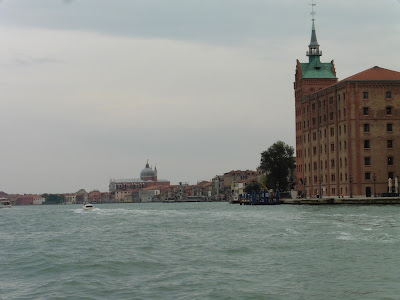 
We sailed along the Guidecca Canal and noticed the Societa Adriatica per Azioni di Navigazione name above one building. 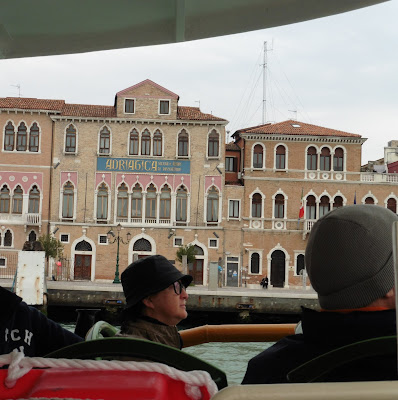 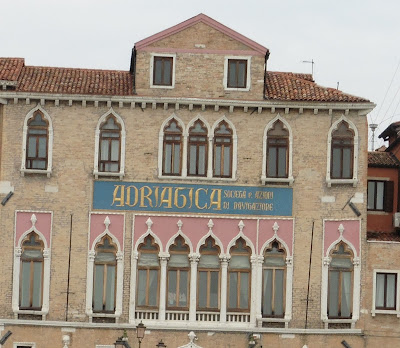 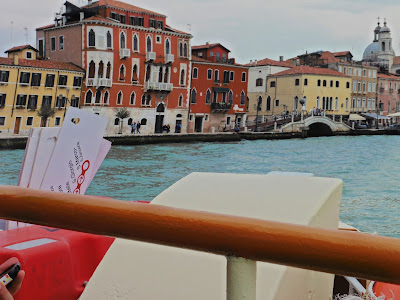 View ahead to our next stop 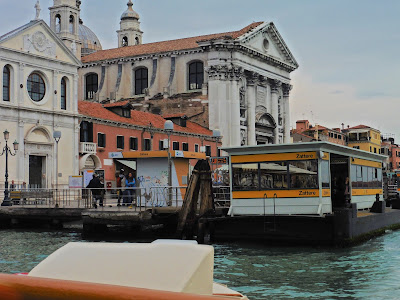 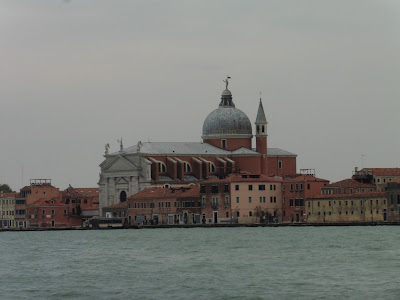 
We stopped frequently along the waterborne route and disembarked at San Giorgio Maggiore, designed by Palladio and built from 1566 to 1610. This is on one of the small islands on the south side of the main island of Venice, with good views of the cruise ships and other local vessels heading out near and far. 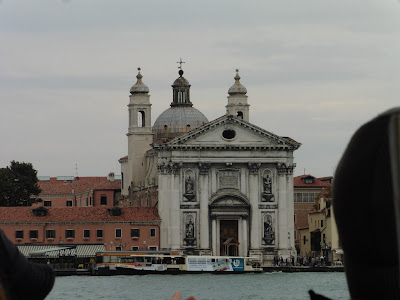 This was the view immediately opposite us 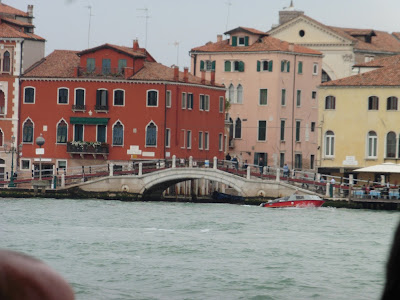 So was this bridge 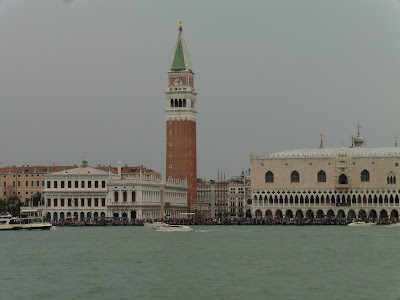 Just a little further along across the water, to our left, was St. Mark's Square and the Campanile


I had time to remember my two days staying in the Cannaregio area of Venice back in September 2015 (see 'More Ferrying in 2015, Part 7'), which was such an enjoyable experience. By coincidence that was the time I took photos from the same places as those taken by my Father when he visited Venice in 1930.

He joined Blue Star Line's NORMANSTAR (travelling to and from the River Plate) in September 1929 as 5th Engineer, worked his way up to 4th Engineer, and then in September 1930 was appointed an Assistant Engineer on the Blue Star Line cruise ship ARANDORA STAR. One of his photographs, also shown on the blog here, he simply called 'Starboard side, Arandora Star Engine Room'.

Yet again I realised I was still Following in Father's Footsteps as I like to call it. The biggest coincidence now is that Father took some photos on 30th September 1930 (I treasure his photograph album and small notebook from his days at sea) but others were taken exactly 87 years ago today, on 1st October 1930, and here I am in Venice on 1st October 2017 taking photographs. 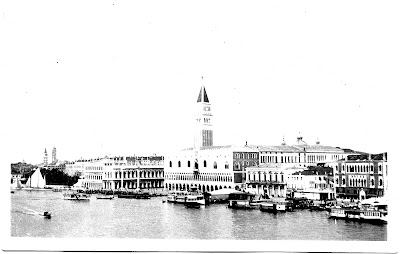 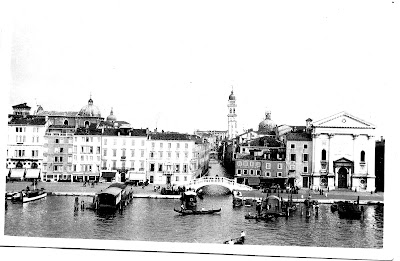 Another view by Assistant Engineer Harry Williams on 1st October 1930 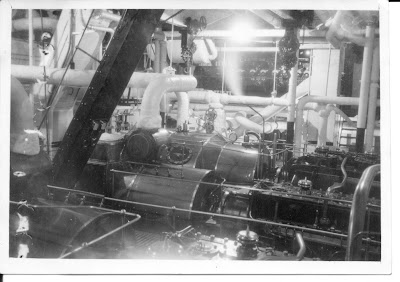 
We knew we had a little time before the cruise ships would appear, and luckily there was a small cafe near where we were standing in front of S. Giorgio, so we enjoyed coffee and delicious chocolate cake. Back outside, windproof clothing took care of the outer body and cake and coffee had taken care of the inner and mental well-being. We had seen lots of local vaporettos heading back and forth, saw CARINTHIA VII, APOLLO, tugs at each end of the cruise ships, all with an antique background of the buildings of Venice. St. Mark's Square was just across the water from where we were standing, and we enjoyed seeing the nearby S. Giorgio Orientale lighthouse, one of two on this little island. Its size made for an often interesting comparison with the passing vessels.

Back in the present we could see the huge top of a cruise ship heading along the Canal towards us. The cloud cover overhead became lower and lower, and there was the hint of light rain in the air. MSC MUSICA headed towards, with a tug at bow and stern, and she seemed enormous when viewed against the Venice skyline. She disappeared from sight around the S. Giorgio Orientale lighthouse and we prepared for the next cruise ship to appear.

The next ship was COSTA DELIZIOSA and of course she too looked enormous in these surroundings. The sight of her reminded me of a very short trip made on her in December 2011 (see 'Costa Deliziosa 18th December 2011') when we sailed out of Savona in Italy, and then headed for dry dock in Marseille - an amazing and amusing experience.

The third and final cruise ship of the day was NORWEGIAN STAR, again aided by tugs. Once we had seen her pass the Lighthouse we headed back to the car park on our second vaporetto of the day, ready to drive away from this little gem of a city. We found a local restaurant which was warm and welcoming, and an excellent end to our day.

Monday 2nd October 2017
Today meant an early alarm call. We drove back to Venice Airport to return the hire car, and checked in for flights home to the UK. Again I was treated to a visit to the BA Guest Lounge by my travelling companion, which was much appreciated.

The weekend had been fascinating and full of comparisons. The visit to the Fincantieri Shipyard in Monfalcone was an unexpected treat thanks to Maurizio Eliseo. The Metamorphosis Exhibition in Monfalcone was interesting and well worth visiting. There we saw the various books on sale including Maurizio's latest publication about Cunard's QUEEN ELIZABETH; we learned that his next book would be the story of the Cosulich family's greatest ships: SATURNIA and VULCANIA. Again, this is being translated into English by the maritime author Anthony Cooke. The short visit to the old Fish Market in Trieste and experiencing the virtual reality headset was fun.

The next day we visited the MuCa exhibition, which included models, and a memorable crane simulator; there was time after that to find good locations to take photographs of MSC SEASIDE and MSC SEA VIEW in the shipyard. Then it was off to Venice to try and photograph the cruise ships as they left the port in the ancient city. I found it nostalgic to remember my previous visits to the little city, and that feeling of 'Following in Father's Footsteps' as I photographed similar views to those he had photographed way back in 1930. It is stranger still to think that he photographed sights on 1st October 1930 in Venice and I was photographing sights on 1st October 2017.

I feel very fortunate in what I have been able to do. Once again I like to think I took the opportunity to SEAS THE DAY.