By the time we had passed the Town Quay location of our Union-Castle Line offices, way back in 1998 when the re-launched Union-Castle Line was preparing for the Centenary Voyage, my Danish friend was starting to wonder just what he was to sail on. He soon found out when we bought tickets for the little Hythe ferry called JENNY BLUE. She is of small and unknown tonnage but is 13 metres long and is standing in on the route at present due to 'safety issues' with one of the other Hythe ferries. It was a warm and sunny day and a pleasant way to spend 20 minutes on the sparkling water as we sailed over to the little village of Hythe, on the west side of Southampton Water.

At Hythe the ferry berths at the end of the 700 yards long Pier, which carries a railway along the track to the centre of town. The original railway was built in 1909 but the current electrified rails were laid in 1922 with a 2 feet wide narrow gauge. There is a wide board walk beside the line which is a pleasant alternative to the ancient but equally pleasant wooden railway carriages. I always enjoy this little trip to Hythe and would recommend it to anyone wishing to photograph any cruise ships in Southampton port or sailing in and out.
(more information can be found at https://en.wikipedia.org/wiki/Hythe_Pier,_Railway_and_Ferry)

There was time for coffee and a walk around in the sunshine, before walking back to the end of the Pier and catching the JENNY BLUE back to Town Quay in Southampton. That was a delightful way to spend a morning before heading back to the hotel to collect luggage and then get a taxi to Mayflower Cruise terminal to join the good ship ORIANA for her 7 day Iberian Cruise.

We took a taxi through Dock Gate 6 and into the docks to the terminal for ORIANA. Check in was fairly easy and I was soon on board my second vessel of the day: the good ship ORIANA. I am booked into cabin F117, an inside twin for single use. 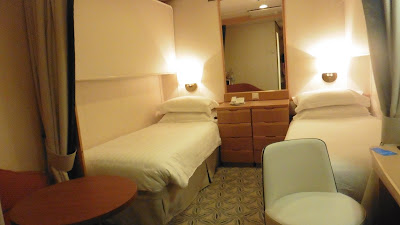 Part of my cabin


Lunch was the next priority as we all started to learn our way around this lovely ship. It was interesting to note that my cruise card had a tiny silhouette of ORIANA on the top right corner in gold, with the word FAREWELL underneath it. The card could be put in a little deck plan case with 'Welcome to Oriana' on the front.

The afternoon was spent catching up with friends, unpacking, and then preparing to meet more of the Ocean Liner Society group for drinks and dinner this evening. We sailed at 5 p.m. from Southampton and I enjoyed seeing the lovely SHIELDHALL as I stood beside a teak deck rail. 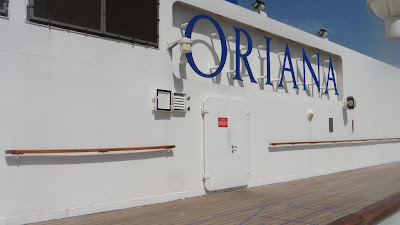 Ship's name above me 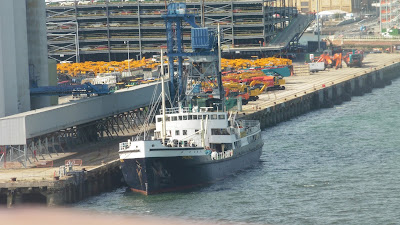 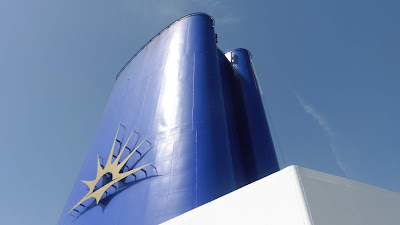 Sunshine on the funnel above me


Tomorrow we have a day at sea, heading south towards La Rochelle in France. My notes for the rest of today simply say 'drinks, dinner, and Show', so I must have enjoyed myself. I note that I mentally awarded the Show's Magician nine marks out of 10 for his skilled performance, so a good ending to a good day.


Ships seen: Oriana, Shieldhall, local ferries to Hythe or the Isle of Wight