23rd June 2015 (contd.)
Our ship back to Piombino is to be CORSICA EXPRESS THREE which berthed near our table, so we could watch the cars and passengers disembark quickly. Her hull was the golden yellow we have come to expect of a vessel in the Corsica Ferries-Sardinia Ferries group. 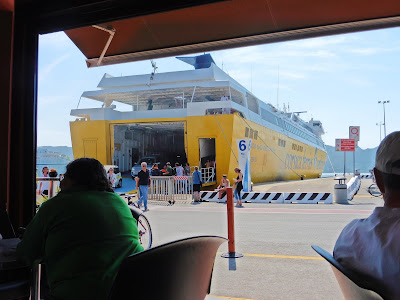 
We finished our drinks and joined the foot passengers waiting to be allowed to board. The ship was built in 1996 at 3,530 gross tons and is a high speed craft so this sailing will be something of a novelty for us. We had to climb several stairways to reach the access to the lounges on the lower or upper decks. Here we could see a very small kiosk/shop, which was closed for the whole journey. We entered the lower deck seating lounge, which appeared to have a slight sheer because we were still in port. I decided I wanted to see the upper lounge and this was quite different in style and appearance so I settled here after we had sailed. 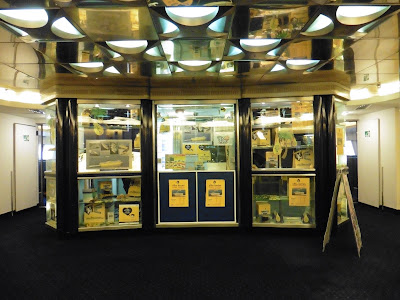 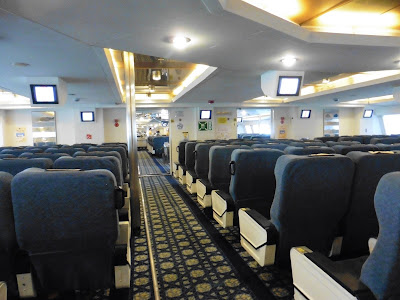 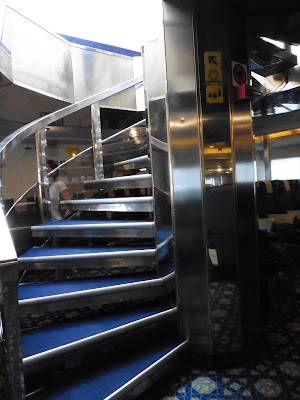 Up to the upper deck 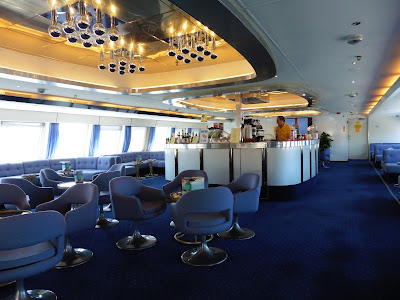 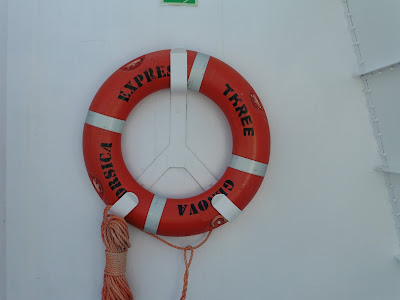 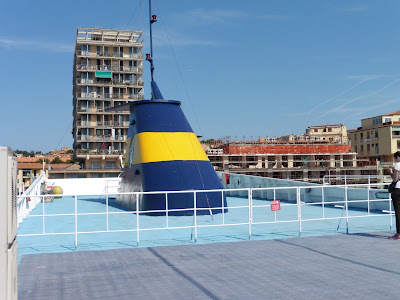 The sunny part of the small open top deck 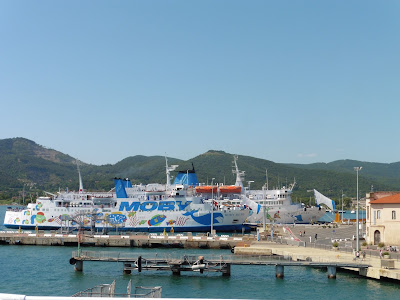 Moby Baby and Moby Lally further along the quay


The top deck was open and gave us good views of the port and other ships but the sun and heat soon drove us inside again. We sailed at 10.45 a.m. and soon picked up speed as we left the harbour; this time the journey to Piombino will take just half an hour so that should give us a different outlook to compare with a normal sailing. I settled happily in the top lounge and as we sailed and the familiar Thieving Magpies music came out from the loud speakers near the Bar. I moved over and stood underneath to hear and enjoy it, and the Bar Steward smiled and turned it up slightly so we could enjoy it together. The few other passengers in the big lounge didn't seem to mind, and it was soon over. A female uniformed member of staff walked through the Lounge so we smiled at each other. I presumed she had come from the Bridge through the doorway at the forward end of the lounge. 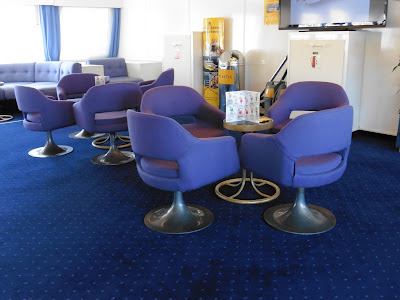 
I was aware that we were going at quite a speed, and when two male members of staff came to the bar in their white overalls I decided it was time to find out. Polite greetings exchanged I felt I could ask them about the speed of the CORSICA EXPRESS THREE and they seemed happy to tell me we were going at twenty-seven knots.

Announcements soon told us we were approaching Piombino (yet again...!) and that we should be prepared to disembark. All passengers from both decks gathered outside the shop, hearing the usual music as we waited. The uniformed female member of staff soon came along, unlocked the shop and took something out in her hand. To my amazement she smiled at me again and handed me a small gift, of one of the Corsica Ferries-Sardinia Ferries bright yellow key rings with their insignia on it. I thought that was so kind and told her so; we were both happy and I was really surprised and pleased. 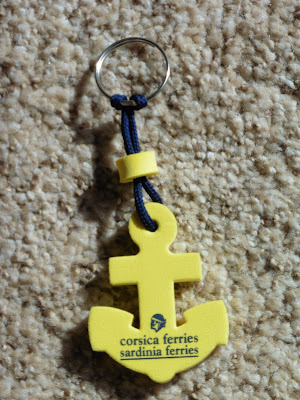 We shook hands and said goodbye all round, and set off down the stairs to the ramp. On the way down we saw the overalled engineers so they said goodbye too - I felt I had somehow done my bit for good international relations this morning!

Back at Piombino we made our way up to the Hotel Phalesia to collect our belongings and the hire car, ready for the afternoon's drive south to Naples. 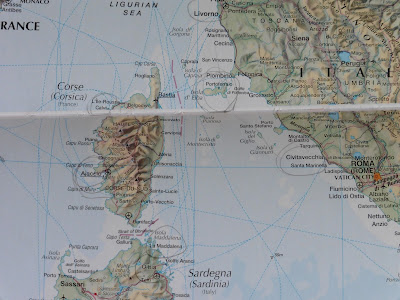 Piombino on the Italian mainland (near Elba), before heading south to Naples