Monday 22nd July 2019
Today everyone seems to be up early for breakfast, ready to leave the ship here in Kiel. I could see the Passenger Terminal tent alongside and hoped we wouldn't need to spend any time in there after disembarkation. 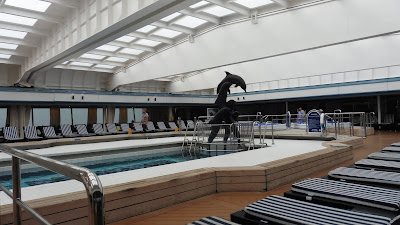 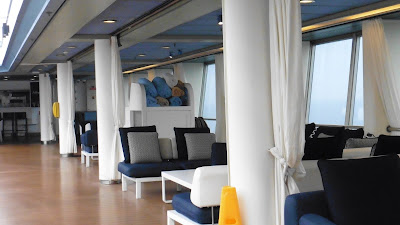 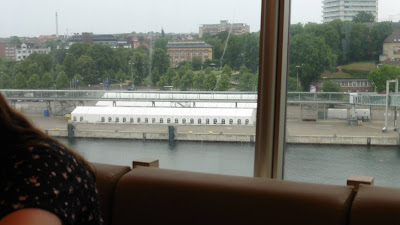 The Terminal tent back in Kiel

I had really enjoyed seeing and sailing on VASCO DA GAMA and thought she was beautifully furnished and planned, with a good flow for passengers. The staff I spoke to had been pleasant and professional and made me feel welcome on board.

My friend and I had chosen Priority Disembarkation, and joined a queue as requested. Unfortunately it would seem that many hundreds of others had also done so, which should not have been a problem, but it was. Nothing could be done, and indeed nothing was done, as far as we could see, but British stoicism saw us through the eventual disembarkation.

Nearing the gangway I handed my cabin card to be registered as I was about to step off the ship and onto the gangway, but the machine said I was not allowed to leave - I was instructed to return to Reception for a cash refund! Since I had authorised my credit card to be used for my final bill, I was surprised at that. Someone in uniform appeared and decided to escort me all the way back to Reception. That was good, as he then waved an arm at the Reception staff and told them to help me straightaway! They did and I was given cash of Euros 7.10 as a refund. I asked why it had not been refunded onto my credit card, but I was told "we don't do that". I signed their acceptance form, and hurried back to the gangway to meet my friend, thinking that had been a weird and rather suspicious experience.

Ah well, a drink and meal (pasta aeroplanes in a tomato sauce) at the wonderful Vapiano soon made me put the incident in the back of my mind; it happened and I will probably never know why, or care about it again.. 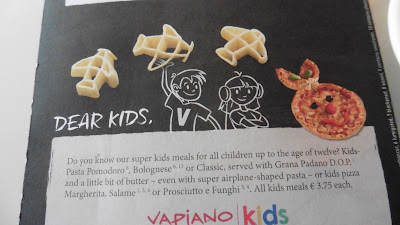 Airplane pasta for me in Vapiano

It was soon time to get a train to Hamburg airport and head for home in the UK. I had enjoyed a fascinating time in Kiel and also on board the VASCO DA GAMA and many other ships. Lucky me, as I often say.